More
HomeEntertainmentTop richest musicians in Kenya as at 2018

Top richest musicians in Kenya as at 2018 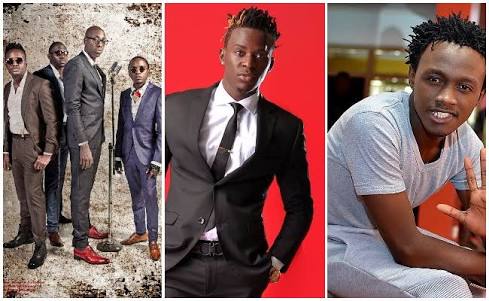 Sauti Sol is a Kenyan afro-pop band formed in Nairobi by vocalists Bien-Aimé Baraza, Willis Chimano and Savara Mudigi in 2005. Initially an a cappella group, guitarist Polycarp Otieno joined before they named themselves Sauti.

Over the years Sauti Sol has made great waves as a spectacular music group through its noticeable achievements.

Without any dubiety Sauti Sol is one of richest group and it has widened its horizon beyond the country.

Akothee is a Kenyan musician who goes by the name Esther Akoth. She was born and bred in  Kisumu city. Akothee who also doubles up as a flamboyant business lady lives in Mombasa city. She is the only musician in Kenya who has done a collabo with Tanzanian finest-Diamond Platnumz.

Jaguar whose birth name is Charles Njaguar has not only succeeded in music industry but also in the field of politics.

He is associated with renowned music lable- main switch studio. He has also collaborated with eminent musicians like Iyanya, Elani, AY and Mafikizolo.

Besides music and politics, Jaguar has also widened his business horizon like aviation, transport sector and real estate.

Bahati whose birth name is Kevin Mbuvi is one of the most successful gospel musician in Kenya. He came into limelight in 2012 and since then he has remained vibrant.

The lala Amka hit maker reached the peak of his music career when he won the coveted award- Groove as the best male artist in 2104. He owns a record label EMB records which  signed East African sensational musician Rebecca Soki.

Willy Paul, who goes by his birth name Wilson Radido is a contemporary gospel artist who has successful won hearts of many.

Willy rose to fame a after a collabo with Gloria Muliro in a remarkable song sitolia. Since then he has released series of hit single songs and collabos.