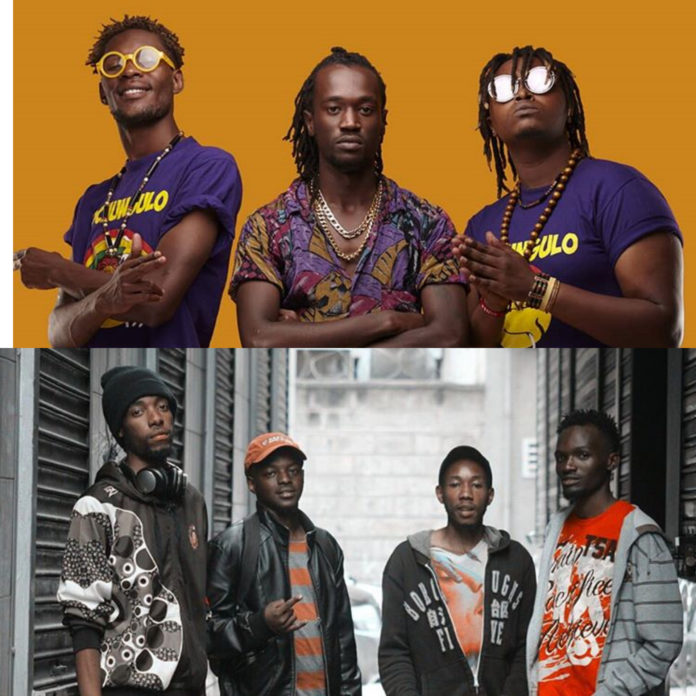 Kenyan music industry has grown to a level that we didn’t expect in such a short period. I’ll take you this at a personal level.

See, Ethic came and how lucky were they? They found a generation that supported their new sound. When Lamba Lolo was released it found the audience that the songwriters wanted.

Honestly they took a risk and luckily they made it. The sound was so popular and new artists like Zzero, Ochungulo Family, Gwash, Razor emerged.

The boy group introduced a new sound that took shape so quickly and fitted in the current music industry.

Their songs include Pandana, Figa, Nitolee featuring Nigerian producer Kriz Beatz, Instagram among many others.

The group of 3 comprises of Nelly The Goon, Benzema and Dmore who reside from  Langata area, Nairobi.

As they stayed in the game much longer they released mind blowing songs that made their brand more bigger. Their songs include Aluta, Chachisha along a host of many others.

Zzero Sufuri is a champ. He is the first new artist to blow with his first single.

Zzero released Zimenishika a song that won the hearts of many Kenyans. The youth felt recognised going by the fact that his first song was entirely about the youth’s life.

You must have come across this phra se online: ‘Wamlambez and Wanyonyez’ .

Sailors Gang introduced this phrase to the Kenyan music industry. The group comprises of Miracle Baby, Qoqos Juma, Shalkido and others.

They have two songs, Wamlambez and their latest release Pekejeng.

The group comprising of three: 2 males and a female released a song titled F*ckboy, this earned them a fanbase and from that release onwards they’ve been releasing hits after hits.

Other songs by the group include Kimonyoski alongside online comedian Kartelo, Chachisha featuring Ochungulo Family just to touch on a few.

Fat Bwoy Gwash has been in the game for a while. During a recent interview the singer revealed that he worked extra hard to earn himself the fanbase that he has at the moment since most presenters and DJs didn’t play his music in the past.

Have you heard a slang that goes like ‘Nipeleke na rieng‘, well, Boondocks Gang are the minds behind the slang word that has since stuck in the youth’s mouth.

Their song Rieng did well as soon as it hit the youths knowledge and it earned the group a collabo with stars Rankaddah, Kristoff and super DJ Vdj One.

The Only Dello is one artiste that really worked hard to get to where he is. After a video of him rapping his current song decided to visit his YouTube channel and honestly hardwork pays.

His first official song is Chupa Ku Chupa a song that you will surely fall in love with.

Madra is one artiste that maybe realised that explicit content sells. His first music was all about explicit jut like Ricco. Madra alongside Boy Bleezy released a controversial song dubbed Matako. Crazy. Right?

After the song did really well he went ahead and released Gikomba a song that atleast made sense.