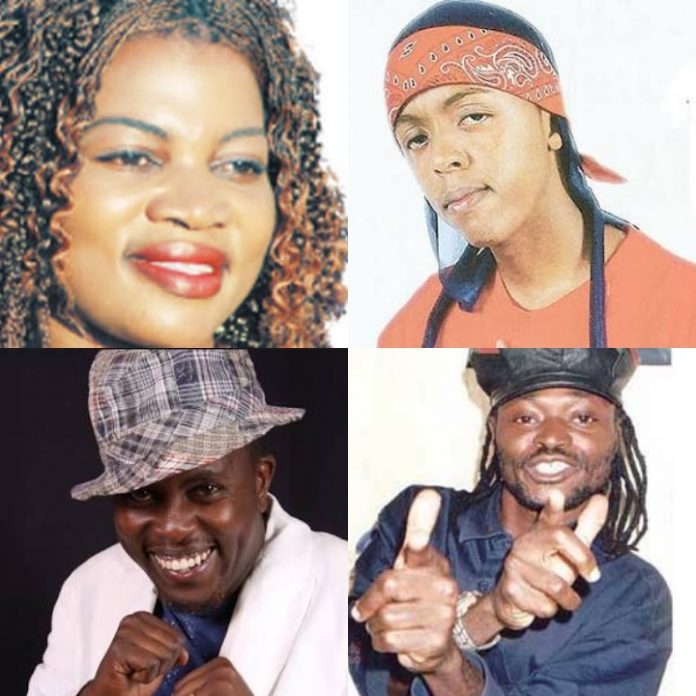 Its crystal clear that Kenyan music industry has grown immensely. With new artists mushrooming day after day, the industry is widening wildly.

However, it is important to note that, there are key musicians who pioneered this industry but unfortunately met their untimely death at the peak of their careers.

E-sir is among the first stars who pioneered kenyan and, probably, the most talented rapper the showbiz industry has witnessed since then. He died in a grisly road accident on March 16, 2003, on his way back to Nairobi from a concert at Afraha Stadium, Nakuru town, to help promote his debut album Tumefika; whose songs remain club bangers to-date.

His mother Damaris Wangui describes her son’s loss as a tragedy. She says the gap he left will never be filled.

Just like E-sir, Chibalonza too perished in a tragic morning road accident at Kinale, on the Naivasha-Nairobi highway while returning to Nairobi from a performance at Egerton University in Njoro.

The bold rapper who passed on in September 2007 is remembered for her amazing work at Calif Records that saw her record songs with Clemmo that featured Pili Pili. Many have described her as one of the best female rappers Kenya never had. Her untimely death came as shock to many.

Lady S came into the industry at a time when, few women were present. She inspired many talents and perhaps she is the reason why many ladies have joined the industry with a bang.

King Kong died on the Christmas Day of 2007 at the age of 34, allegedly after being poisoned. His sudden demise came as a shock especially to his regea fans.

He started as a street urchin in Kisumu before moving to Nairobi with the assistance of DJ Stone, where he released top charting songs like Ladies Choice and Cinderella.

Poxi presha is greatly remembered for his boldness when it comes to the issue of fighting for rights of artists. His daring and a got-getter attitude are among the things that uniquely describe him.

Kaberere passed away in 2014 after the release of the hit song Mwanake, where he featured alongside the gospel star Benachi. That song was voted as the best Collabo of the Year at the 2015 Groove Awards.

His death was a big blow to the gospel fraternity, but above all its God who gives and takes. Though he is physically not there, his spiritual presence is overwhelming through songs like mwanake and mitego.

Carlton Williams Bongo Juma alias K-rupt, was born in 1979. This Kenyan rapper was famed for the songs like Tukawake and Chacha. Before his murder in 2003, K-rupt had made alot out of his music career.

Carjackers attacked their matatu along  Nanyuki-Nakuru highway. When he tried to argue with the gangsters, they opened fire arm, killing him on the spot with a single bullet. His body was later recovered in Laikipia forest.

Wiki Mosh is greatly remembered through his hit song Atoti, where he featured Maji Maji. He died after being hit by a bus in Nairobi while returning home from the Chaguo La Teeniz awards ceremony at the Carnivore in Nairobi.