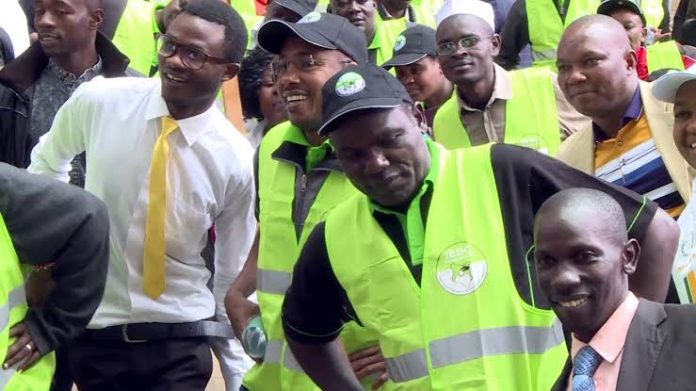 The Independent Electoral and Boundaries Commission is accepting applications for interviews for the positions of poll clerks, deputy poll clerks, and presiding officers.

The successful candidates will then be chosen from a short list of candidates for training leading up to this year’s general elections. Below is a list of the salaries for each employee of the IEBC who will be in charge of the August elections.

Presiding officials in charge of the polling locations will receive Ksh 2,000 daily pay for a total of 13 days.

The polling/counting clerks who will be in charge of the actual voting process will be given a daily wage of Ksh 1,000 for a period of nine days.

Support Election Trainers will be paid Ksh. 2,000 per day for 15 days to explain the fundamental steps of the electoral process to presiding officers and their deputies.

Voter educators—those in charge of the civic education of ward voters—will be given Ksh. 1,500 to take home each day for 30 days.

1,500 shillings will be awarded to officers in charge of logistics who labor for 30 days before to the election.

Kenyans who were interested in working with the commission to ensure the holding of free, fair, and credible elections were asked to submit applications for nearly 400,000 temporary posts in an advertisement that concluded on May 6.

Ward-based voter educators, who are responsible for teaching ward residents about civics, would be paid a daily remuneration of 1,500 Kenyan shillings for a period of 30 days.

As the country gets ready for the elections on August 9, all eyes will be on the Anniversary Towers-based Commission to see how well-prepared it is to handle one of Kenya’s most stressful general elections.

The applicants draw attention to Section 30 of the IEBC Act, which provides that commission members or employees who engage in election fraud that jeopardizes free and fair elections may be subject to a penalty of up to three years in jail, a fine of up to one million shillings, or both.