Summary Of Constitutional Changes As Proposed In BBI Report 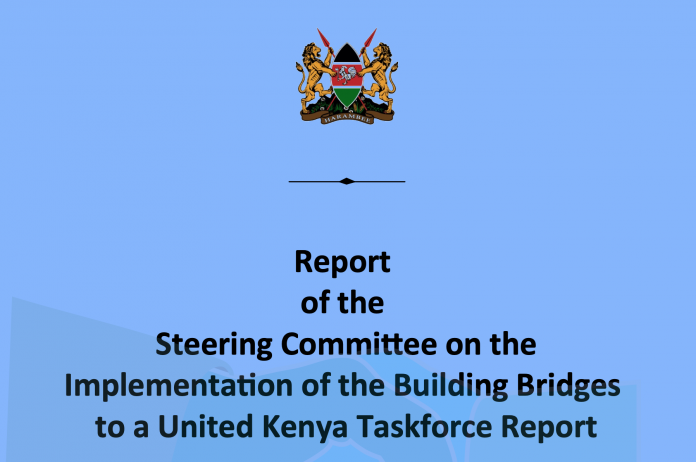 “Wakenya tuisome…sio tukiwa tumeweka kofia ya kisiasa. Tuisome kama wananchi wa Jamhuri ya Kenya. Let us read it as individual citizens because it is about your life, the life of your children and your children’s children. Let us not politicize life! Politics will come and go but this society that we call Kenya is here to stay,” said President Kenyatta.

The BBI report will be launched officially at Bomas of Kenya on Monday 26 October, 2020.

Chapter Two of the Constitution  on formative aspects of the Republic to address regional integration, cohesion, shared prosperity and the centrality of the economy.

This is in order to harness regional trade, investment and people-to-people links to increase Kenya’s prosperity, opportunities for investment and enhance  security.

Chapter Three on Citizenship to strengthen the national ethos by outlining the responsibilities of citizens. The amendment is informed by the understanding that the current Constitution has rightly imposed various socio-economic duties on the state but does not envision any responsibilities on the part of the citizen.

Chapter Four on the Bill of Rights to provide a constitutional underpinning for the privacy of citizens’ personal data as an emerging area in human rights owing to significant technological developments in this area.

Chapter Six on Leadership and Integrity to intensify the fight against corruption by strengthening the relevant institutions. This includes providing a mechanism for more expeditious conduct of investigations, prosecution and trial of corruption-related matters.

Chapter Seven on Representation of the People to resolve issues of divisive elections arising from electoral processes. The proposed amendments seek to:

Chapter Eight on the Legislature to undertake the following: Remodel the Parliamentary system by bringing the government back into the House, including the Prime Minister, Deputy Prime Ministers, Cabinet Ministers, the Attorney-General and the Leader of the Official Opposition, being the person who was the runner-up in the Presidential election.

Chapter Nine on the Executive by expanding the national executive in order to promote greater inclusivity, and mitigate the drawbacks of the winner-takes-all electoral formula.

It also provides that Cabinet Ministers may be appointed from among members of the National Assembly.

The Committee makes this recommendation cognizant of the provisions of Article 77(1) of the Constitution of Kenya which bars state officers from receiving emoluments for more than one role.

Chapter Ten on the Judiciary to enhance judicial accountability to the people of Kenya.

This means that while the independence of the Judiciary must be protected as a fundamental principle, the Judiciary should equally be accountable in a clear manner to the sovereign will of the people of Kenya.

It is therefore proposed to introduce the independent office of the Judiciary Ombudsman, who shall sit on the Judicial Service Commission.

Chapter Eleven on the Devolved Government by making the following changes:

Chapter Twelve on Public Finance to streamline public finance principles and processes to promote efficiency and ensure expenditure is directed to maximising utility.

The proposals give special attention to the actualisation of the rights guaranteed under Article 43 as well as strengthening devolution.

Chapters Thirteen, Fourteen and Fifteen to ensure that the Public Service, National Security agencies and Commissions and Independent Offices are not only strengthened but also:

Chapter Sixteen on General Provisions to define new terms introduced by other proposed amendments.Third Schedule on National Oaths and Affirmations to make provision for the oaths to be administered in respect of state officers for whom such requirements had been omitted.