More
HomeBreaking NewsRuto to receive a call from President Uhuru after he was denied... 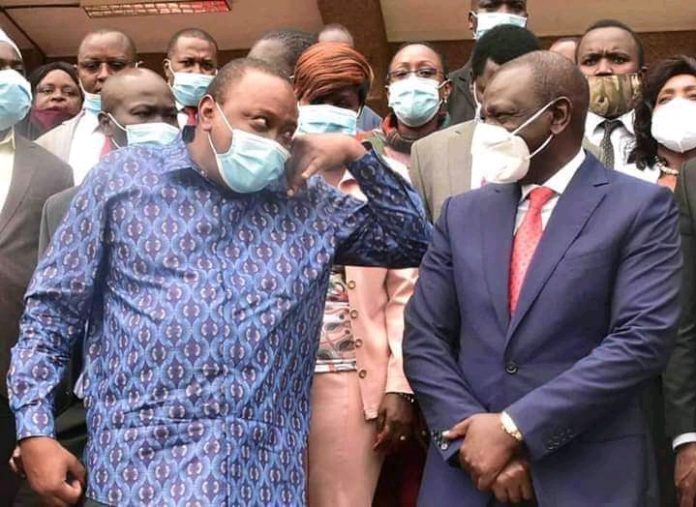 After today’s Jubilee Parliamentary PG which was attended by President Uhuru Kenyatta and his Deputy William Ruto a photo has emerged where the President seems to signal his deputy that he will make a call later to him.

This signal has caused uproar in social media handles as many perceive it as a way the President was going to explain to his deputy what transpired and made him to make the changes.

The Deputy President today seemed not to be worried at all during the meeting as his allies were being kicked out in his presence.

It’s only the person who made the opening prayers and Raphael Tuju who is the Party’s Secretary-General were allowed to speak and in turn invited the President to speak and the meeting lasted only for 30 minutes.

The onslaughter targeted at the DP allies, pundits believe, is aimed clipping his wings hence thwart his influence in Parliament ahead of 2022 presidential elections.

The perceived rebellious MPs recently unveiled parallel Jubilee offices which they branded as Jubilee Asili said to be located on Makindu Road, off Riara Road in Nairobi’s Kilimani area.

Murkomen said the aggrieved lawmakers took the move after they were blocked from accessing Jubilee party offices located in Pangani.The Elgeyo Marakwet Senator further explained that Jubilee Asili is not a party but “a meeting location for like-minded MPs”.

But Jubilee Asili which has been branded with Ruto’s dissolved URP party colours, has been touted as a new party that the Deputy President is intending to use in the race to State House in 2022.