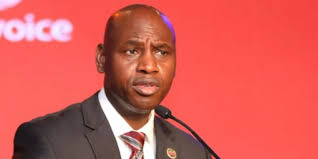 The Independent Electoral and Boundaries Commission had cleared Walter Mong`are as the first presidential aspirant. However, on 6th of June, the electoral body revoked the clearance certificate on grounds that the aspirant had not met the minimum requirements.

In an interview on Wednesday, the Umoja Summit Party presidential candidate faulted the IEBC for denying Kenyans an opportunity to vote for their preferred candidate.

According to Walter mongare, an opinion poll report released by InfoTrak  on Wednesday that shows about four million Kenyans have not decided on their preferred presidential candidate, is proof enough that he also has a huge opportunity to exploit.

Similarly, Roots Party presidential hopeful George Wajakhoya has also taken the IEBC by the horns. He vehemently faults the body for locking out his competitors on flimsy grounds. According to him, the regulations adopted by the electoral body are in conflict with the constitution hence bringing a dilemma on what Kenyans should refer to.

As a remedy, George wajakhoya promises to suspend some parts of the constitution for a period of six months and make legislations directly from the people through parliament should Kenyans elect him.

In his government, every Kenyan will take part in every critical decision making, a special aspect that the constitution has denied the IEBC.

According to reports from the IEBC, Mong`are did not have a University degree hence did not merit to vie for presidency.

Walter Mong`are vows to continue with his presidential campaigns till the Independent Electoral and Boundaries Commission serves him with an official communication locking him out of the 2022 General Elections.