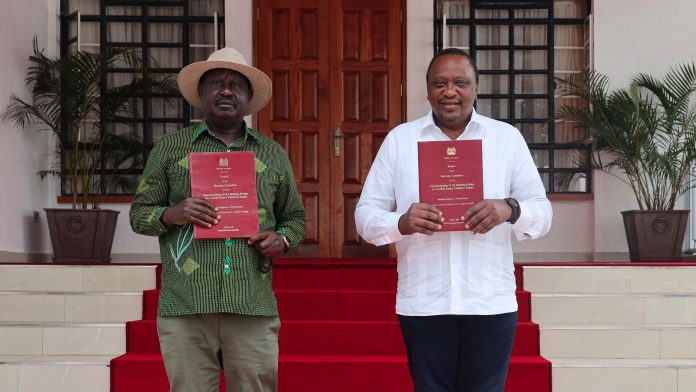 The Building Bridges Initiative (BBI) taskforce has handed over the much anticipated BBI report to both president Uhuru Kenyatta and ODM party leader Raila Odinga. While receiving the report at Kisii State Lodge, the two principals (Raila and Uhuru) heaped praises at the report stating that it was the only way out for a united Kenya.

The report recommends a Constitutional amendment that would see reintroduction of the Office of the Prime Minister. This will however require a referendum to endorse the proposals.

The report states that under Article 151 of the reviewed Constitution, the Office of the Prime Minister shall exist.

Functions of Prime Minister as proposed by BBI

The premier will be appointed by the President, if the proposal is adopted. Under the new Supreme Law, the PM would have the following functions:

“Within seven days of the Speaker receiving a nomination from the President, the Speaker shall call a vote in the National Assembly to confirm the appointment of the person proposed by the President.

“A vote under clause (3) passes if it is supported by more than half of all the members of the National Assembly. Where the National Assembly fails to confirm the appointment of a person nominated by the President, the largest party or coalition of parties shall within seven days of rejection of a nominee, designate another member to be the party leader in the National Assembly and clauses (1), (2) and (3) shall apply.”

A vacancy in the Office of the Prime Minister arises under the following circumstances:

Impeachment of the Prime Minister

The proposed Law states that the process of impeaching the premier begins when “a member of the National Assembly, supported by at least one-quarter of all members proposed a motion of no confidence in the Prime Minister.”

The premier will be deputised by two Deputy Prime Ministers appointed by the President, per the proposed Law. The Deputy PMs will be picked from Cabinet ministers.

The functions of the Deputy PM include:

The Office of the Deputy Prime Minister becomes vacant if the person:

Kenya is home to one of Africa’s hottest sports betting markets. The East African nation has an adult population of about 35 million people,...
Read more
Jambo Info

This learning process involves "the use of technology for learning in or outside of a classroom." People related to education use this technique; however...
Read more
Jambo Info