More
HomeGeneralZambia's Janny Sikazwe to be in charge of the Kenya vs Ghana...

Zambia’s Janny Sikazwe to be in charge of the Kenya vs Ghana AFCON match, as Davies Omweno mans the Seychelles clash 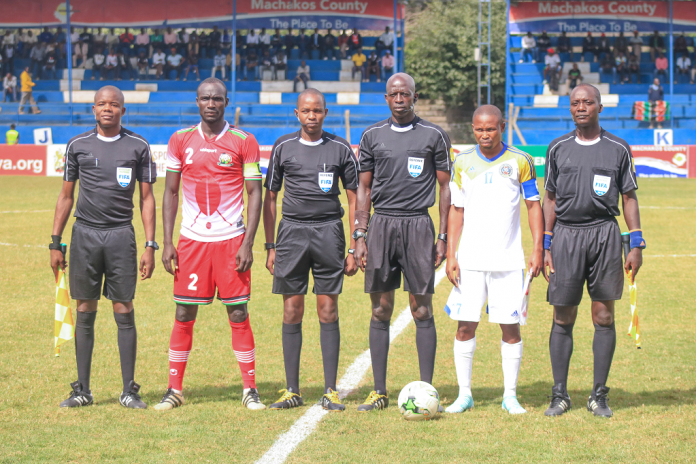 The Confederation of African Football (CAF) has named the referees to take charge of the all upcoming 23 Africa Cup of Nations Qualifiers slated for this Saturday and Sunday.

Zambian official Janny Sikazwe will be the center referee for the Kenya versus Ghana match; and will be assisted by compatriots Oliver Gift Mweene and Kabwe Chansa. Wisdom Chewe is set to be the fourth official while Jean-Albert Rollin from Reunion will be the Match Commissioner.

The Harambee Stars match will be played on Saturday, September 8, 2018, at the Moi International Sports Centre, Kasarani, with tickets priced at Kshs 200 for Regular fans and Kshs 1000 for VIPs.

Kenya lie third in group F with zero points after losing 2-1 away to Sierra Leone in their opening group match. Their weekend opponents, Ghana, sit at the summit of group F with a superior goal difference over Sierra Leone; with both teams having amassed 3 points, each. Ethiopia are rock bottom, of the group, with an inferior goal difference of -5.

Kenya kicked off residential training for the match on Sunday, September 2, 2018, in Nairobi, and will be hoping to give a good account of themselves against the West African Soccer powerhouse, in their quest for a place in the 2019 Africa Cup of Nations finals.

Elsewhere, Egypt begins a new era when they face Niger in a Group J clash at the Borg El Arab Stadium in Alexandria on Saturday.

It will be the Pharaohs first match under Mexican coach Javier Aguirre, who was appointed last August, replacing Argentine Hector Cuper, who left his position after the FIFA World Cup in Russia, 2018.

Shifting focus to the continental showpiece event qualifiers, Egypt, losing finalists, at the last edition in Gabon in 2017, need nothing short of a win against Niger to remain in contention. The Pharaohs occupy bottom of the log after losing their opening day game away to Tunisia 1-0, while Niger managed a home barren draw with Swaziland.

A game against Niger doesn’t bring the best of memories to the Pharaohs. After their unprecedented Africa Cup of Nations hat-trick titles 2006 (at home), 2008 (Ghana) and 2010 (Angola), Egypt failed to defend their title in 2012 with Niger standing in their way.

“Mena” as the Algerians are nicknamed recorded a historical 1-0 victory in Niamey in October 2010, and Egypt winning the reverse fixture 3-0 in Cairo was just a dead rubber; as Niger had already qualified to their first ever Africa Cup of Nations before the calsh.

“I know it’s a tough game, and I want to start my job on a positive note,” said Aguirre as the Pharaohs started their training camp in Alexandria on Monday.

Egypt hopes to make use of the new AFCON format, as participants are extended from 16 to 24 teams, meaning top two sides of each group go through.

Aguirre, who happens to be the first ever Mexican tactician to work in Egypt, has chosen a 26-man squad for his very first mission. On top of the list comes Liverpool winger and reigning African Player of the Year Mohamed Salah, who leads 12 foreign-based players. The squad has witnessed many new faces, with six players having their debut call-ups.

“It’s a new era and we’re starting everything over again. Expect to see more changes and you have to know we’re starting from the zero point. We have some experienced players, and now we’re adding new faces to the team, and this will continue,” concluded Aguirre.

Tunisia travels to Mavuso as guests of Swaziland in the other Group J match on Sunday.