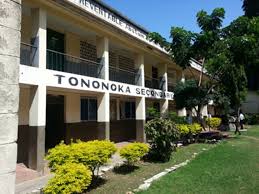 Tononoka Secondary School principal Mohammed Khamis has died of Covid-19 days after infections were reported among staff. The death of Mr. Khamis was confirmed the his deputy principal, Mr. Nzaro.

The news about the sudden demise of the Tononoka school principal, comes barely a week after eleven COVID-19 cases were confirmed at the institution leading to its closure.

Star of the Sea High School is also another school that was shut down last week on Wednesday, October 21, after four cases of COVID-19 were confirmed at the institution.

Resurgence of covid-19 cases in the country has informed the government to shelve plans to reopen schools fully. Education cabinet secretary professor George Magoha, revealed that the rest of the learners will continue staying home till the government advices otherwise.

Speaking while inspecting the distribution of government-funded desks at Dr Muthiora Primary School in Dagoretti, Nairobi, Magoha said that the government had decided not to proceed with full reopening.

“Those classes that were not opened before, should remain closed until the government advises otherwise. I hope that the government has made itself very clear on this one. If you do not abide, there shall be consequences,” stated Magoha.

Betika is a Gaming Platform registered and licensed by BCLB (Betting Control and Licensing Board of Kenya) under Betting, Lotteries and Gaming Act, Cap 131,...
Read more
General

Betway is among Africa's online sports betting platform. In Kenya it is licensed and regulated by the Betting Control and Licencing Board of Kenya (BCLB)....
Read more
General

The Teachers Service Commission (TSC) has released a list of counties that wont be mapped as hardship areas. This means teachers in these areas...
Read more
General

MozzartBet; How to Bet, Deposit and Customer Care Contacts