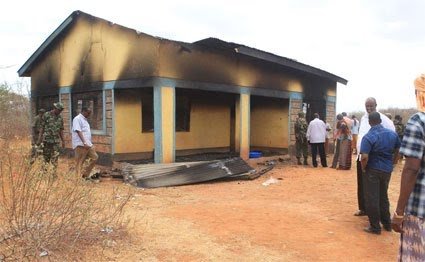 The teachers’ commission now says the fallen teachers were not posted there and, therefore, are not part of them.

Issuing a statement on Thursday, the Mandera County TSC Director Ahmed Jimale stated that the two slain teachers killed in the attack were hired by the Arabia Boys School’s Board of Management and not the TSC.

“We highly regret what befell the two teachers at Arabia Boys High school on Wednesday morning, but I want to say that those were never our employees,” Jimale said.

The county education boss further revealed that the TSC had moved all other non-local teachers from all noted terror hotspots in Mandera and Garissa to more safer grounds as was directed by their headquarters office in February this year.

“Even as we speak now, none of our registered teachers are teaching in such like volatile areas,” he added.

According to Jimale, at least 108 non-local teachers from both the secondary and primary schools had been transferred at the time of the attack.

When asked, Mr Jimale said until a teacher gets an appointment letter from TSC headquarters, he or she remains an employee of the board.

Despite TSC’s statement, the two teachers who survived said they had been posted to Arabia and were waiting for confirmation letters from TSC headquarters.

Mr Elija Nderitu and Mr Kelvin Lumosi, the survivors of the attack, were only a month old at the school.