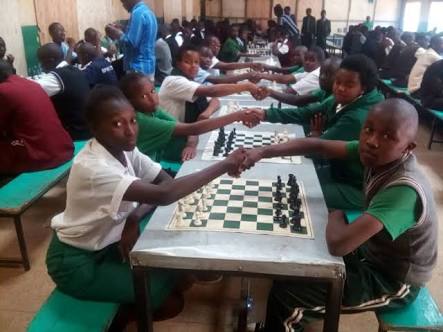 A new, splinter, group Christened Chess In Schools- Kenya(C.I.S-KENYA) has been formed after a leadership fallout at the mother, Chess Kenya, Federation.

Trouble started when the Chess Kenya executive board, under Mr. Benard Wanjala’s Leadership, suspended the head of Chess in Schools Committee; one Mr. Shem Vilebwa.

In a letter dated 31/08/2018, mr. Wanjala indicated that Mr. Vilebwa’s services had been discontinued. “This is to inform you that the Chess Kenya has terminated your appointment as Head of Chess in schools, with immediate effect”, said the letter.
” You are required to hand over any property you hold, to Chess Kenya, not later than 10/09/2018..” added the letter.

In a statement, Mr. Vilebwa decried the high handedness at Chess Kenya.
“I wish to inform you that we’ve contacted KESSHA, KEPSSA, KESSA KEPSHA and relevant bodies – stakeholders in Education with respect to matters arising out of Chess in schools.
In the event that there be differences, we’ll get them ironed out.
We’ll however not allow any school children, teachers and school administrators to be mistreated by anyone in the name of overruling in the area of chess Sports”. Said Mr. Vilebwa in a statement.

In a statement, Mr. Wanjala had no kind words for the splinter group. “I think teachers need to be enlightened how the federation operates right from grassroot to world stage. Some argument clearly Show knowledge gaps and will not appreciate the action taken. As a federation, we have a clear agenda, we need to work with like minded people willing to Champion our vision. If we feel one is frustrating our progress, we have no options but to relief him of duty”. Said mr. Wanjala in response to Mr. Vilebwa’s decision.

The latest development comes as the body running Secondary Schools Sports in (KSSSA) was mulling the introduction of Chess in its Calendar; starting 2019.