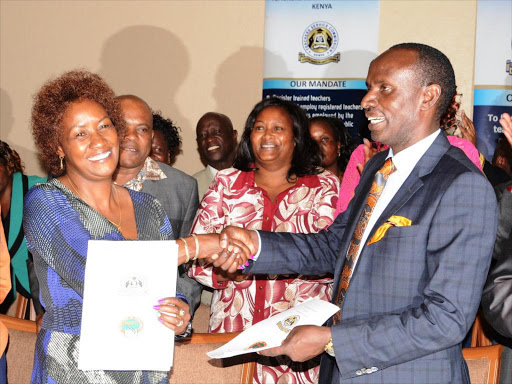 Kenya National Union Of Teachers KNUT through its Secretary General Wilson Sossion has distanced itself from reports that it is opposing reappointment of Dr. Nancy Macharia to serve as the CEO of the commission.

In a statement on 3rd July, Mr. Sossion said that union has not filed a petition in any court opposing Dr. Nancy Macharia’s reappointment for the second term.

“The union would like to take the earliest opportunity to refute claims that it has filed petition in any court opposing the reappointment of Dr. Macharia to serve the commission for another term,” stated KNUT SG.

Mr. Sossion who also doubles as the ODM nominated Member of Parliament further noted that strained relationship between the union and the teachers’ employer is on the mend but such reports may pour cold water on efforts to see the two bodies amicably working together in bettering the teaching service.

“The union would wish to point out that the industrial relation with the commission that guarantees and facilitates structured and constructive dialogue for the purpose of maintaining industrial peace in the teaching service hence the union will not entertain busy bodies that would derail warm relationship between KNUT and TSC,” said Sossion.

Dr. Macharia’s term to serve as the CEO of the commission in the first term ended on 30th June 2020. Since there is no evidence that the position was advertised and competitively filled, then it is clear that she will continue to server as the CEO for the next five years.

However, Midrift Human Rights Network has petitioned Nakuru High Court judge Monica Mbaru to declare Macharia’s reappointment null and void, arguing that the position must be filled through a competitive process.

At the same time, Law Society Of Kenya (LSK) president Nelson Havi on 29th June wrote to Attorney General Paul Kihara questioning why the process of appointing a new TSC chief executive officer was yet to commence.

Havi was for the opinion that filling the position of TSC CEO should be a competitive process.

“The information we have is that there are plans to renew her five-year contract for a further five years without subjecting the position to a competitive recruitment process,” reads the letter dated June 29.

One of the things that can give you an upper hand in any interview is proper preparations. In order to see to it you...
Read more
TSC NEWS