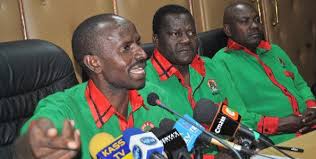 Kenya National Union of Teachers comprise of the following 8 leaders.

To get latest news updates from KNUT always visit www.Knut.or.ke

One can reach KNUT through their SMS platform using this number: 22551

1.Every registered teacher, certified, licensed or authorized to teach, shall have the right of admission to any of the Branches of the Union upon payment of the Entrance Fees as provided in the Rules of the Union together with other levies that may be stipulated by the particular Branch which the teacher desires to join. Persons eligible for membership of the Union shall be only those who are or have been regularly and normally engaged as teachers.

2. If, in the opinion of any Branch, the applicantâ€™s professional conduct makes it desirable that his her name should not be on the Roll of members, the matter shall be referred to the National Executive Council for enquiry by the Professional Standards Committee of the Union.

4. Upon admission, the Teacherâ€™s full name shall be written in the Unionâ€™s Nominal Roll showing the memberâ€™s name in the Teachersâ€™ Register kept by the Teachers Service Commission of Kenya, and when possible the name or management of school to which the member is assigned. The member shall be provided with a Membership Card bearing his/her name in full, address and such further particulars that may be necessary to afford easy identification of the member.

5. Every application for Membership shall be accompanied by a Remittance of Kenya Shillings Five (Kshs.5/=) as Entrance Fee (besides which additions may be stipulated by the Local Branch) and paid to the Treasurer. No person shall be admitted to the Union or to any of its Branches, unless he/she has previously agreed to abide by the Rules of the Union. In addition to the Entrance Fee, the new member must pay the Annual Subscription for the year and any other levies that may be decided upon by the National Executive Council or the Annual Delegatesâ€™ Conference.

6. (a) The Union Subscription Fee shall be collected from every member of the union at the rate of two percent (2%) of the basic salary of every member per month.
(b) The Subscription Fee shall, in as far as possible, be collected through the Check-Off-System.
(c) The National Treasurer shall pay to the Branch Treasurer a percentum to be decided upon by the National Executive Council (NEC) of the union the total monthly subscriptions collected from the branch.
(d) If at any time the National Executive Council is of the opinion that the allocation of the subscriptions should be revised, they have the power to make the necessary revision.
(e) The KNUT shall operate on a closed shop system.

7. Any member of a Branch of the Union who is transferred from one District to another, shall on payment of all dues, be entitled to a â€œDeem itâ€� which shall make him/her eligible for enrolment in the Branch of his/her new area without the necessity of paying the entrance fee or the annual subscription again.

8. Every member shall be at liberty to withdraw his/her membership from the union by clearly stating his/her reasons for resignation to the NEC through the BEC in which case the party withdrawing will cease to be entitled to enjoy any benefits of privilege from the union.

9. One shall cease to be a member of the union if he/she has been dismissed and his/her certificate, licence or authority to teach has been cancelled by the Teachers Service Commission except a member whose case is taken up as a trade dispute by the Kenya National Union of Teachers until the dispute is finalized and the solution is not in his/her favour.
Furthermore, one ceases to be a member if he/she retires or resigns from the teaching service except the full-time elected officers of the union including the Executive Officers (formerly teachers) whose compulsory retirement is as stated in their terms and conditions of service.

10. It shall be lawful for the National Executive Council to discipline any member of the Union in any way it may deem necessary wither by censure, fine, suspension, expulsion; and any member expelled forfeits all rights.

12. (a) Any Union member who, in the opinion of the National Executive Council, shall have injured or attempted to injure the Union or to work contrary to the interests of the Union or its members, or attempted to break off or dissolve the Union other than as allowed be these Rules, or otherwise brought the Union to discredit, or refused to comply with the order or decision of any committee having jurisdiction over the said member under these Rules, or requested or taken work from the employers at any place where a professional dispute exists between such employers and the Union or any Branch of the Union, or obtained or attempted to obtain any of the benefits of the Union by means of misrepresentation, or knowingly participated in or been party to any fraud perpetrated on the Union such as misappropriation of its funds or the funds of any Branch thereof, or acted contrary to any orders or the directives of the National Executive Council rendering his/her conduct inconsistent with the duties of a member of the Union, may be expelled by the National Executive Council of the Union and he/she shall thereupon cease to be a member, but can appeal to the Annual Delegates Conference.
(b) Any member of the Union who has been convicted of any crime involving fraud or dishonesty shall not be an officer of the Union at both National and Branch levels.

13. Any member of this Union who resigns under â€œSection 8â€� of this Article may be readmitted on application to the National Executive Council.

14. Every student on being accepted for entrance to a Teacher Training Institution, shall be eligible for membership of the local Branch of the Union in the Area of the authority under which she/he is a Teacher or a student, as an ASSOCIATE MEMBER.

15. Associate members shall not be obliged to pay any fee or subscription and shall have no voting rights.

1. Honorary Membership may be conferred on any person who, in the opinion of the Annual Delegatesâ€™ Conference has rendered outstanding service to the cause of the Union. Such Honorary membership shall not carry any right to vote on any matter, nor shall an Honorary Member be eligible to hold any office in the Union.