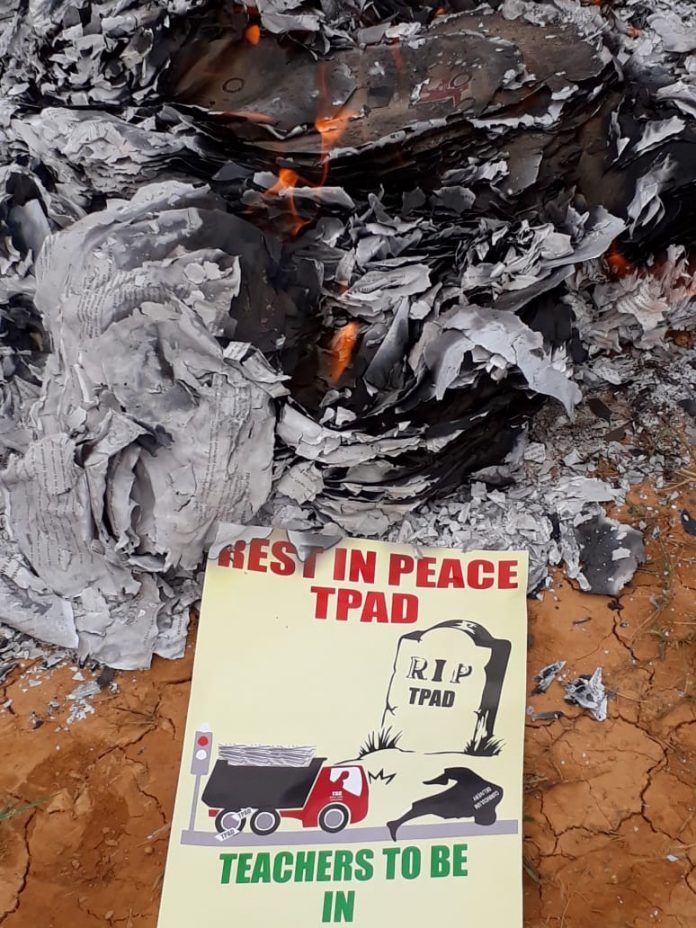 Teachers attending a KNUT Annual Branch Meeting in Kakamega, today, set TPAD forms on fire, a move seen to be agitated by the TSC’s decision to discipline their colleagues in Nyamira. The physically agitated teachers sporadically carried their forms to the middle of the venue ground and set them ablaze, while chanting Luhya slogans. The meeting held at Malinya stadium in Kakamega was attended by KNUT top brass, including the SG, honourable Sossion, and local top Ministry and TSC officials who watched in disbelief.

Early this week, the TSC summoned teachers who had participated in the burning of the copies of Teacher Performance Appraisal and Development (TPAD) during a KNUT meeting held at Metamaywa market; in Masaba North sub-county on 29th August, 2018.

“At the meeting you participated in the burning of the copies of Teacher Performance Appraisal and Development (TPAD) in the glare view of members of the public” read a show cause letter seen by Jambo News.

Pressure is mounting on the TSC to do away with the tiresome TPAD exercise that has reduced teachers to mere secretaries at the expense of teaching. Its ironical that TSC boss had promised to review teacher appraisal program, yet nothing has changed few weeks later.

TSC is set to meet KNUT later this month in a bid to settle issues that have been raised by teachers. Matters touching on promotion of teachers, career progression, teacher appraisal and withdrawal of non- consultative policies will be detailedly discussed in a five-day retreat that will run from 30th September to 5th October.

However, there have existed bad blood between TSC and KNUT in the recent days. The teacher employer has accused KNUT of misleading teachers on issues related to their professionalism. On the other hand, KNUT has strongly accused KNUT of curtailing teachers their freedom of participating union meeting by threatening them with show cause letters.

“It is against the constitution for the employer to curtail teachers from attending union general meetings,” Mr Sossion said.