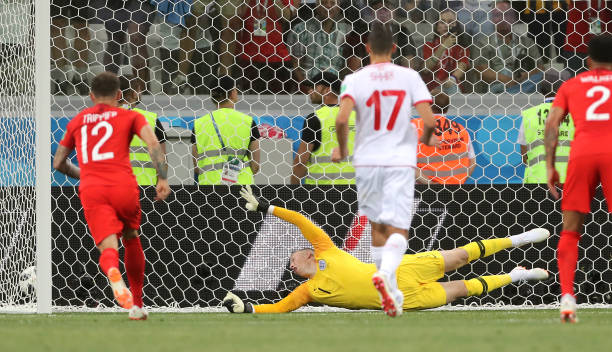 It was one of the most fascinating game where England opened the scoring when Harry Kane tucked in the ball after a Ashley Young corner found its way to him.

Ferjani Sassi Africa’s first goal at the 2018 FIFA World Cup has set the internet ablaze despite their lose to England after Kane scored two goals and both from corners.
After the equaliser England tried untiringly to find a breakthrough but could not as both sides went into the break tied at 1-1.

Unfortunately, Tunisia’s effort to go home with one point was made futile after Harry Kane scored his second goal at injury time.

Tunisia becomes the first African team to score at the 2018 #WorldCup, after the three African teams Egypt, Morocco and Nigeria that played earlier fruitless tried to shake the net.

Though Tunisia was defeated 2:1, by England, this goal gave hope for a brighter future for African teams in world cup 2018, since no other African team has seen the back of the net so far.

On their next matches, England will take on Panama, while Tunisia take on Belgium in the other group fixture.