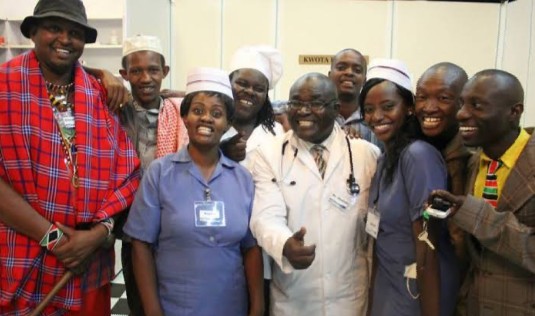 Daktari is a Kenyan comedy drama show that aired on KTN Home from 7.30pm till 8.00 pm on every Tuesdays. Survey even shows that it was one of the most watched shows in Kenya’s media.

Daktari was produced by the one and only Phil Karanja, who is married to Kate Actress, that is, Catherine Kamau. Kate actress rose to fame after she because cast of Mother in Law, a Kenyan show. The two can never stop showing the world how madly in love the two are. The 32 year old is a renowned digital producer in Kenya. He is the owner of ‘Sue na Jonnie’ and ‘Hullaballoo Estate’. In 2018’s Kalasha Awards, Sue na Jonnie won the Best TV Drama, Best Actress in a TV Drama and Best Actor in a TV Drama whereas Hullaballoo Estate won Best Comedy. He co-owns a production company known as ‘Phi-it’ with Bob Muriithi and Abel Mutua.

Two of the cast members of KTN’s Daktari were top casts at the veteran Vioja Mahakamani show. Olexander Josphat Makoha and Ondiek are part of Daktari. Vioja Mahakamani is one show that entertained lots of Kenyans for about 2 decades. Replacing the veteran casts such as Ondiek with new faces was such a wrong move since fans had already familiarized themselves with the old cast. New faces such as Nice Githinji, Maasai and Dr. Ofweneke took in their roles, something the old cast has since bashed them for.

Updating of personal profile in Teachers Service Commission website is a simple and a straightforward process. Before you start the process ensure that you have...
Read more
Entertainment

You may have heard about Morimbocho a song by Gusii's fastest upcoming artist, Superboy Junior. Today we had time to talk to him and...
Read more
General