More
HomeGeneralCovid-19 cases in Kenya now at 715; recoveries rise to 259 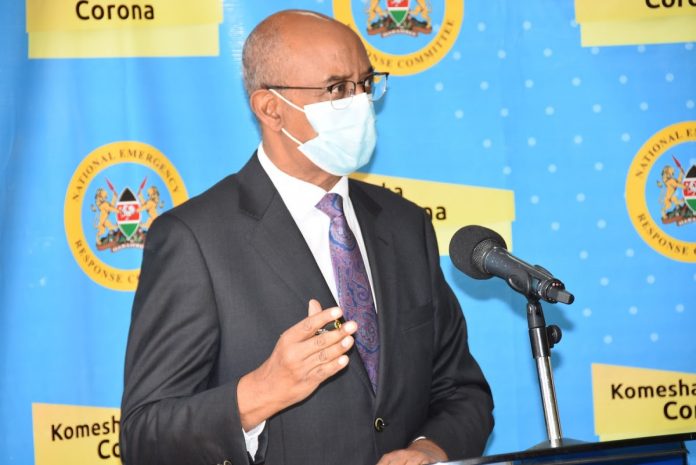 Health CAS Dr. Rashid Aman has announced that  15 more covid-19 cases have been confirmed in Kenya from a total of 978 samples that were tested in the last 24 hours.

Fourteen(14) of the new cases are Kenyans while one(1) is a Rwandese national; the youngest being 1 year and 8 months old while the oldest is 62 years. Ten(10 )are male while five(5) are female.

Speaking during the daily covid-19 briefing, Dr. Aman noted that the total number of cases in the country has increased to 715.

Of the new confirmed cases seven(7) are from Mombasa, three from Migori, two(2) from Wajir and one(1) each from Nairobi, Machakos and Kiambu.

Mombasa reported positive cases from Mvita (5), Jomvu (1) and Kisauni (1) while Migori had one each from Kuria East, Tebesi and Nyamarama.

Dr. Aman announced that 8 more persons have been discharged today bringing the total number of recoveries and discharged to 259.

Sadly, the CAS also noted that three more patients have succumbed to the virius raising death toll to 36. All the deceased are from Mombasa county.

The CAS confirmed two died at home while one died in hospital.

The health CAS further indicated that delegation from health ministry led by Dr. Amoth was sent to Kajiado county to ascertain measures needed to keep the virus at bay, especially at the Namanga border.

“Today I have dispatched a high level delegation from the Ministry led by Dr. Patrick Amoth to Kajiado, the team will also pay a visit to the Namanga border to ascertain the measures we need to put in place to curtail cross border transmission,” stated CAS Rashid Aman.