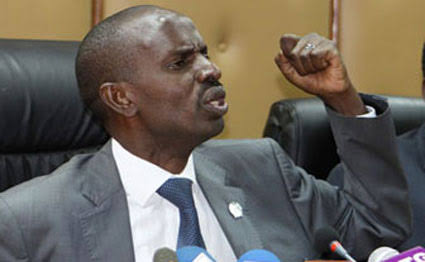 Nominated Mp Wilson session who also doubles up as Kenya National Union of Teachers secretary general will continue to serve as KNUT SG.

May 2018 majority of National Executive Committee voted 22 against 2 members to suspend Sossion. NEC further appointed his deputy, Hesbon Otieno to take over in an acting capacity.

Its a big blow to acting Secretary General Hesbon Otieno and acting Chairman Wycliffe Omucheyi. The duo have strongly opposed the idea of hon. Sossion being the SG on the pretext that he can’t hold two offices.

The decision to allow Session to continue serving as KNUT SG was reached after parties, including the Teachers Service Commission (TSC) agreed to retain him and end the legal battle before Justice Maureen Onyango. Other parties in the case include Registrar of Trade Unions and Hesbon Otieno Ogola.

The case that was opppsing Wilson Sossion’s position as sg was further marked “withdrawn”. TSC and registrar of Trade Unions agreed to pay Sossion Ksh.100,000 as cost.

Wilson Sossion will now move fast and fully push for pressing issues raised by teachers ahead of five day retreat that will commence later this month.

The retreat is meant to iron out pressing issues that have adversely affected teachers. Teacher appraisal, Career progression, Promotion and delocalization are among the issues that will fully discussed.