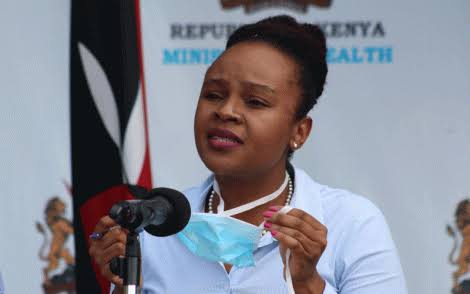 This is is the third day in a row the country is recording three figure digit in a period of 24 hours since the virus was first confirmed on March 13.

Speaking during the daily Covid-19 briefing at Afya House, Dr. Mercy Mwangangi who is Ministry of Health CAS stated that 3831 samples had been tested during the period bringing cumulative tests conducted so far are 74,003.

In Nairobi, Kibra had the highest number of cases at 49, followed by Ruaraka (13), Makadara (4), Westlands (4), Langata (2), with Embaksi West, Kasarani, Dagoretti North and Starehe recording one case each.

Dr. Mwangangi further announced that 17 more people had been discharged after recovering, bringing the total recoveries to 438.

The CAS also noted that four more patience persons succumbed to the virus and this brings the total fatalities to 62. All fatalities are from Mombasa county All had either hypertension, diabetes or asthma.

Dr. Mwangangi also cautioned persons who are using ‘panya routes’ to escape from counties that are placed under restriction.

“We have observed a worrisome trend. There are individuals using ‘panya routes’ to access areas under restriction. Sneaking out of restricted areas is equivalent to sneaking the virus into other counties. We caution such persons,” stated the CAS