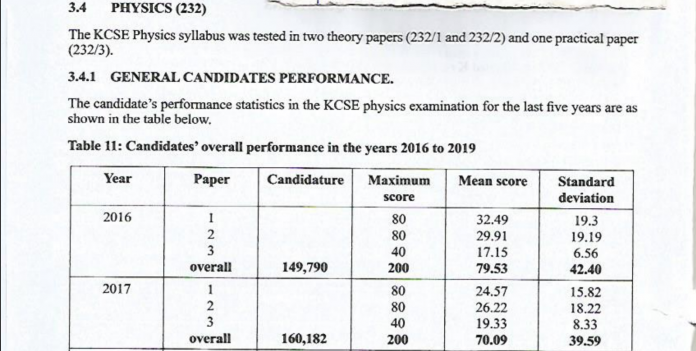 The candidate‘s performance statistics in the KCSE physics examination for the last five years are as shown in the table below.

From the table it can be observed that:

The standard deviation in all the Physics papers is near normal. This shows proper discrimination between the high and low achievers.

An analysis of the student‘s responses revealed that there is still lack of knowledge on comparative words that show the differences in the physical characteristics or behavior of materials. Application of the knowledge in the new tasks is challenging most candidates.

The following is a discussion of some of the questions in which candidates performed poorly.

A micrometer screw gauge has a 0.03 mm error. State the reading that is observed on the instrument when used to measure the diameter of a wire whose actual diameter is 0.38 mm.  (1 mark)

Candidates were expected to determine the error and establish the meter reading the actual measurement.

Candidates were quick to add the zero error without realizing that in the task what was required was the meter reading and not the actual measure.

A student carrying a heavy box using the right hand is observed to lean towards the left hand side. Explain this observation. (2 marks)

Candidates were expected to explain why one leans on the opposite direction when carrying a load in one hand.

Many candidates were not able to relate the leaning in opposite direction to the balancing the shift of the position of the Center of gravity.

The box shifts the position of the center of gravity of the system towards the right hand maintain equilibrium. The student leans in the opposite direction.

Two boxes E and F of masses 2.0 kg and 4.0 kg respectively are dragged along a frictionless surface using identical forces. State with a reason which box moves with a higher velocity: (2 marks)

Candidates were required to compute the force applied using the relation F=ma.

Some candidates failed to identify the formula Fema from the information provided.

E (201) F=Ma, the smaller the mass, the higher the acceleration

(a) Figure 6 shows a bottle top opener being used to open a bottle.

Indicate on the diagram the direction of the load and the effort. (2 marks)

(b) State two ways in which an inclined plane can be made to reduce the applied effort when pulling a load along the plane. (2 marks)

(i) Draw a diagram to show how the system can be set up in order to lift a load and indicate the position of the load and effort. (3 marks)

Candidates were required to identify the effort on a bottle opener, state ways of reducing friction on an inclined plane, drawing the pulley system and evaluating the efficiency of the pulley system.

Some candidates mixed the responses on the inclined plane as if still the bottle opener. The drawing of the pulley system was such that the number of strings direction of the effort were not well mastered. 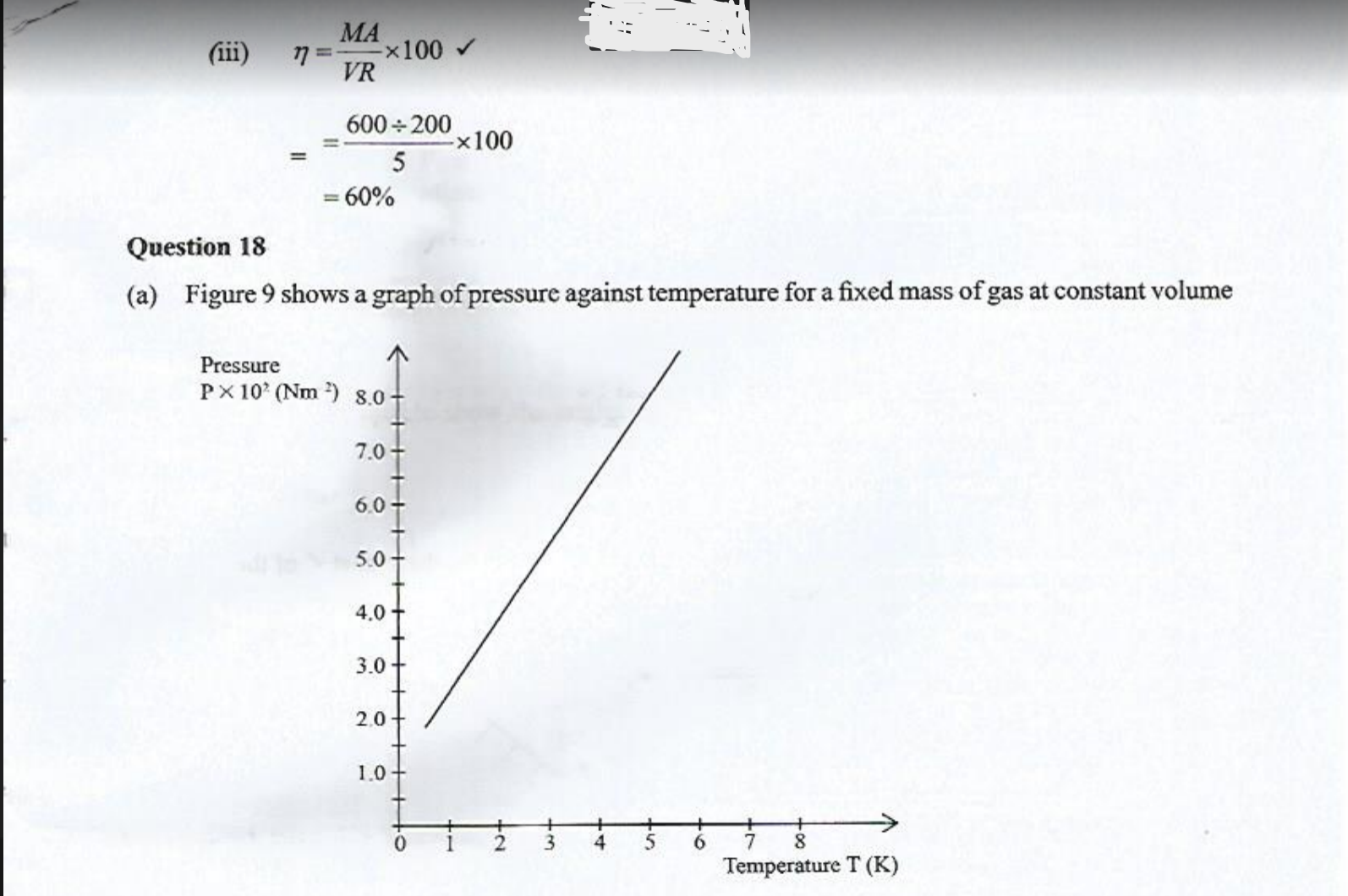 From the graph, determine the values of n and c given that P=nT + c where n and c are constants. (4 marks)

(b) Explain why it is not possible to obtain zero pressure of a gas in real life situation. (2 marks)

(d) State any three assumptions made in kinetic theory of gases. (3 marks)

Candidates were required to carry out a graphical analysis of a provided graph to evaluate the slope and intercept using the relation y = mx +c, state why a real gas cannot have zero pressure, evaluate volume from the pressure law and state the assumptions of the kinetic theory of gases

Many candidates lacked the graphical analysis of the graph to obtain the slope and intercept accurately. 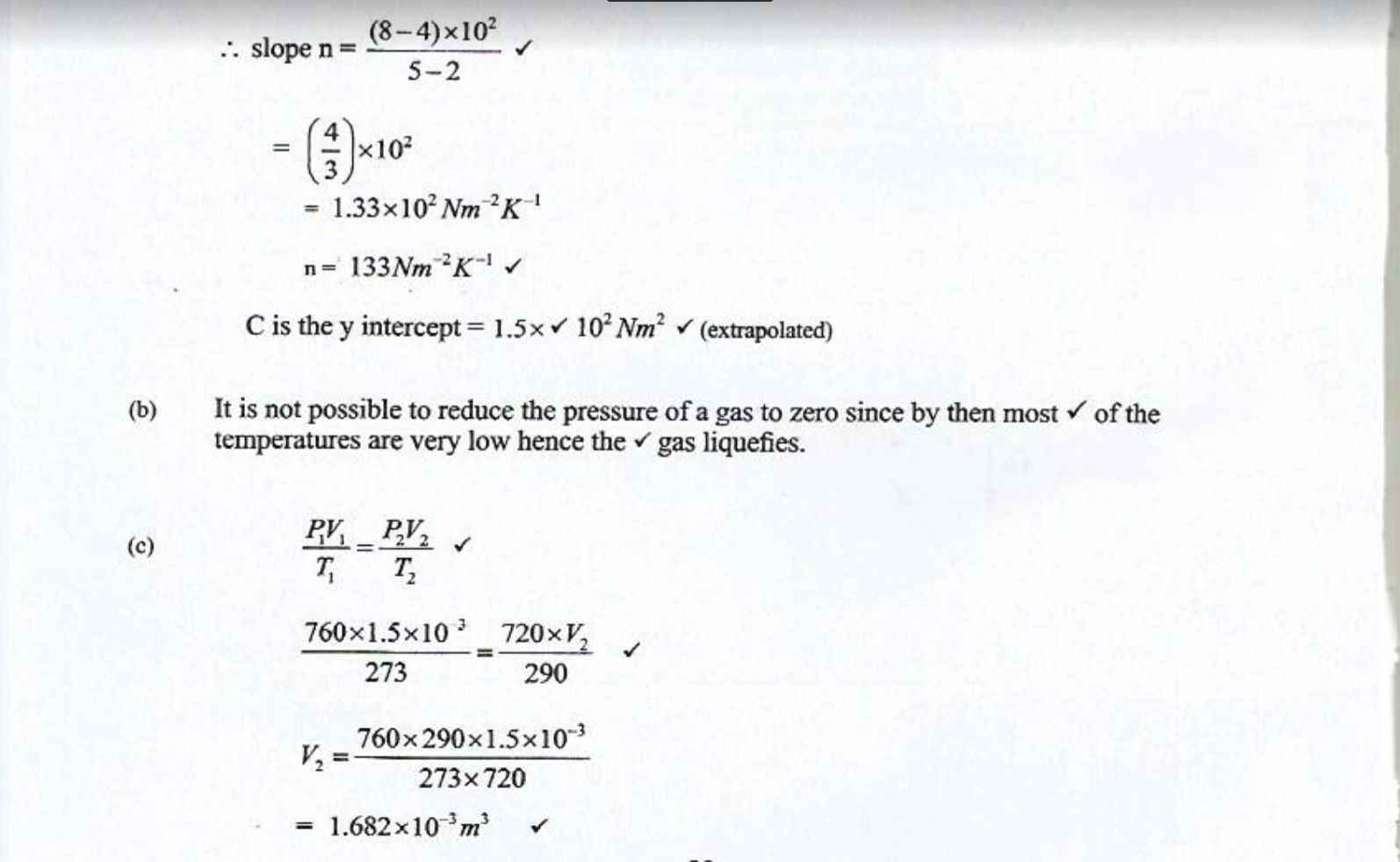 (d) Assumptions of the kinetic theory of gases: –

Attraction of between the molecules is negligible. ✓

Volume of the molecule is negligible compared to the volume of the container occupied by the gas. ✓

The length of time of a collision is negligible compared to the time between collisions.✓  (Any three)

Figure 1 shows two plane mirrors inclined at an angle of 120° to each other. A ray of light makes an angle of 40° with the first mirror.

Candidates were required to draw rays to show reflection of various mirror surfaces.

Many students were unable show the angles of incidence and reflection, most were drawing lines instead of rays.

Figure below shows the input and output signals on a CRO screen when two diodes are used during a full wave rectification.

Explain how the two diodes rectify the input signal. (3 marks)

Candidates were required to explain the application of diodes for rectification.

Many students confused lack ways of expressing what they mean. The direction of flow of current in each half cycle not well outlined.

Some candidates confused between image and object, talking of object instead of the image formed.

Shows the object as being further than it actually is. Shows diminished images.

(a) Describe how a magnet can be demagnetised using the electrical method.  (2 marks)

You are provided with two iron bars P and Q. One of the bars is magnetised while the other is not. Explain how the magnetised bar can be identified without using a magnet or magnetic material.  (2 marks)

(i)Explain what is observed on the galvanometer when the switch is closed. (4 marks)

(ii)State what is observed on the galvanometer when the switch is opened. (1 mark)

(iii)State what would be observed if the number of turns in coil Y is doubled. (1 mark)

Candidates were required to display knowledge on magnetism, properties of magnets and explain the process of mutual induction.

(a) Place the bar magnet inside a solenoid placed in an East, West direction alternating current through the solenoid then pass an

(ii) Pointer deflects in the opposite direction

(a) Define half life as used in radioactivity. (1 mark)

(b) Figure below shows a device used to detect radioactivity by forming tracks when air is ionised.

(ii) State how air in the device gets ionised. (1 mark)

c (i) State two factors that determine the speed of the photoelectrons emitted from a metal surface.  (2 marks)

I. Express this energy in joules. (1 mark)

II. Determine the frequency of the light that produces the photon. (2 marks)

Candidates were required to define radio activity, explain the detection of radiations and show understanding of photoelectric effect.

Most candidates failed to use the key words in radio activity, were unable to distinguish between types of cloud chambers and lacked knowledge on most concepts in the topic.

(a) Half–life is the time taken for half the number if nuclides initially present in a sample to decay.

Due to collisions between the radiations from the radiation source and the air molecules. When the piston is pulled down air expands hence cools The ions form nuclei for condensation upon cooling on which the saturated alcohol vapour condenses forming visible tracks.

However, from the responses that were analyzed the following practical tasks were poorly performed.

You are provided with the following:

– A stirrer – A stand, a boss and a clamp – A thermometer – An ammeter A voltmeter – A beaker – A source of boiling water – Two dry cells in a cell holder – A switch – Seven connecting wires – A component labelled X

(a) Set up the circuit as shown in figure 1.

(b) Pour hot water into the beaker and set up the apparatus as in figure below, so that component X and the thermometer bulb are fully immersed.

(c) Stir the water from time to time, when the temperature falls to 80o, switch on the circuit, read and record the current I and the potential difference V in table 1. Then open the Switch.

(d) Repeat (c) as the temperature falls to the other values shown in table 1. Complete the table below (8 marks) 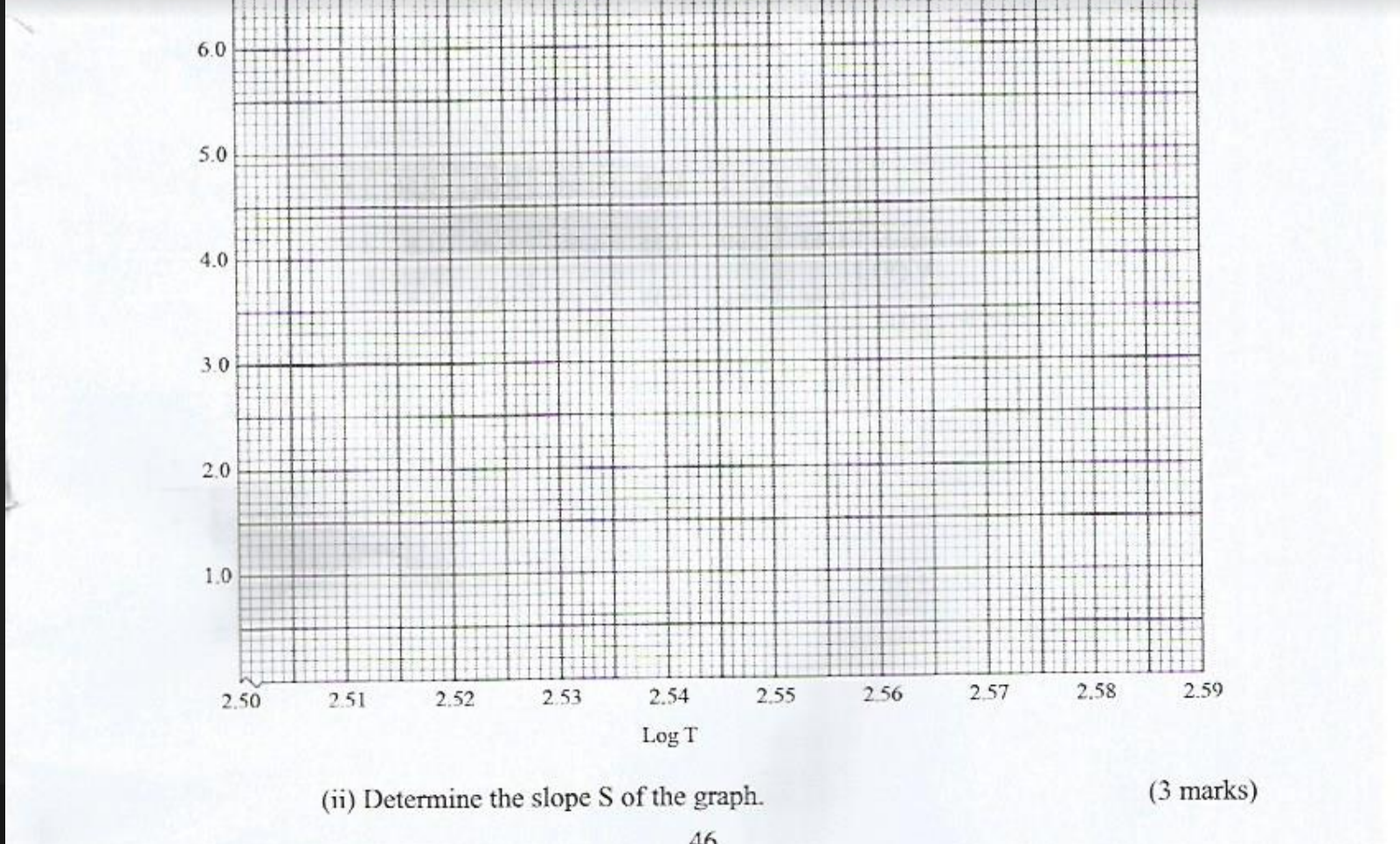 (ii) Determine the slope S of the graph. (3 marks)

(f) Given that R and T are related by the equation Log R=Log K1 nLog T, determine the value of;

Candidates were required to assemble apparatus, take measurements accurately and manipulate the data to the required number of decimal places.

Many candidates indicated wrong readings from the measuring instruments, failed to work with the correct significant figures and units. 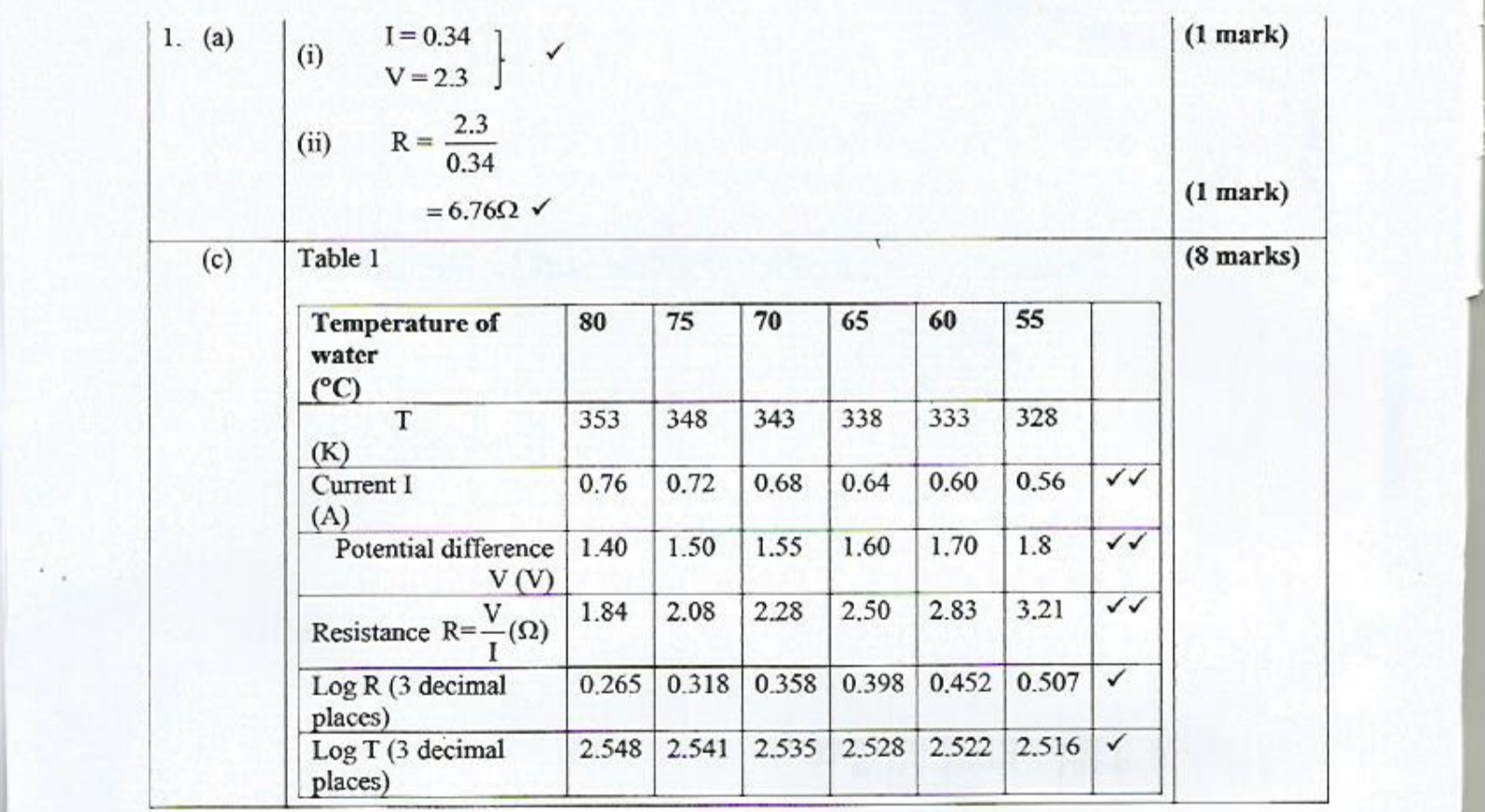 The Kenya National Examination Council KNEC has  directed heads of primary schools to registers pupils in grade 3 ahead of their assessment. According to...
Read more
KCSE 2020

GENERAL CANDIDATES PERFORMANCE  The table below shows the performance of candidates in the three papers offered in 2019 in the KCSE English Examination. Similar Data...
Read more
KCSE 2020

History and Government equips students with adequate knowledge that enhances their understanding of social, economic and political developments of the world. Students are expected...
Read more
KCSE 2020