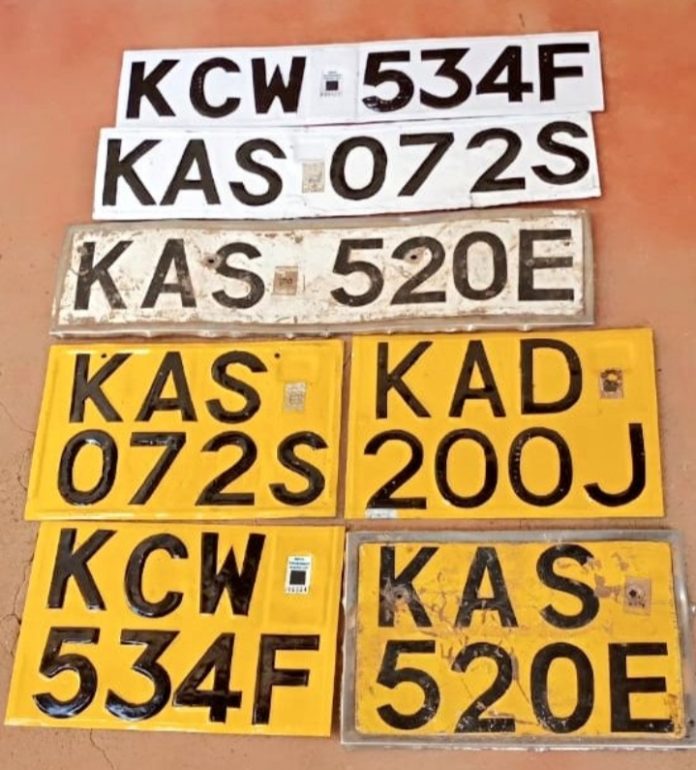 David Ogeisia Migosi alias Mwalimu, a teacher at St. Columbans Secondary School in Kitale has been apprehended by DCI detectives.

“A stealth operation netted the suspect; 48-yr-old David Ogeisia Migosi aka Mwalimu, a teacher at St. Columbans Secondary School in Kitale who has been on the run, in whose possession were 17 Fake Logbooks and a Toyota Probox,” stated DCI in a tweet.

The teacher together with two other accomplices were arrested in connection with a car theft syndicate.

Pursuit of the syndicate was triggered by reports of over 11 cases of motor vehicle thefts in a short span within the said region, inviting the deployment of a team of DCI, SSU and CR&IB detectives to narrow down on the cartel members on 11th June, 2020.

“Following numerous reports of stolen motor vehicles across the South Rift region and the consequent arrest of the mastermind of a syndicate involved in the theft, DCI Detectives pursuing the cases today recovered Five stolen m/vehicles in different parts of Transzoia County,” said DCI in a tweet.

According to DCI, Mwalimu, was the mastermind behind the car theft syndicate.

Arresting officers found found him in possession 17 fake logbooks and a Toyota Probox.

After interrogation, his two accomplices; Asman Memba Bakari, 38, and Jeremiah Yego Kiptoo, 34, were arrested at their hiding place.

Three suspects found in possession of three of the said motor vehicles were arrested within Kitale, while one vehicle was found at a car wash in Kiminini and the fifth one in Matunda.

Here are some of the items recovered by the DCI so far.

The DCI has indicated that operation still ongoing to recover more vehicles which have been stolen from members of the public, as the three suspects await arraignment.

Are you aspiring to join Teacher Training College to pursue Diploma in Primary Teacher Education, then worry no more. MOE is inviting applicants for...
Read more
Education News

Ministry of Education, MOE, has  invited applicants wishing to be considered for admission to Diploma Teacher Training Colleges. According to information sent to media...
Read more
Education News

Following the phasing out of P1 training in Kenya, the Ministry of Education has released a list of Teacher Training Colleges, TTCs, that have...
Read more
Education News

How Competency Based Assessment (CBA) Will Be Carried Out Under CBC

Competency Based Assessment (CBA) is critical for the  success of CBC implementation at all levels. Effective CBA entails  a balance between formative and summative...
Read more
Education News

Transition Of First CBC Cohort From Basic to University  Education

Transition of the First CBC Cohort from Basic to University  Education is envisaged to occur in Year 2029. Read also: CBC Transitioning And Domiciling of Junior...
Read more
Education News