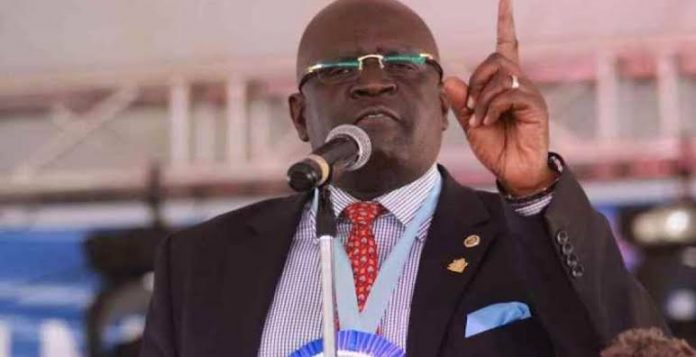 Professor George Magoha has dismissed claims that confusion has rocked the ministry of education. This comes barely a week after the government reversed funds meant to pay staff employed by Board of Management(BoM).

Speaking in Eldoret after assessing the status of preparedness of institutions of higher learning, Magoha said that the decision to push reopening of schools to January was not final, that should Covid-19 situation turn around, the government is ready think twice.

“We said schools are closed until January but since we did not know the behavior of the virus, we’re ready to sit down and change our minds, is that what you people call confusion? Can you go and read the dictionary and find out what confusion is,” stated Magoha.

Education Cabinet Secretary also hinted that Eldoret Polytechnic and the Rift Valley Poly (RVTTI) are almost ready for reopening, after he assessed  their status of preparedness.

“We have inspected many institution. Eldoret Polytechnic and the Rift Valley Poly (RVTTI) are two of the best. They are not completely ready, but I can dare say that they are going to reopen ahead of others. We shall look at them again in a month,” noted Prof. Magoha.

The CS further supported the recent move by the government to direct school principals to confirm the number BoM teachers in their schools.

He said that the move was meant to ensure that money is not stolen.

“The President allowed us to pay BOM teachers, which is usually not catered for directly by government. Our job is to ensure that money is not stolen. So if we step back to confirm and reaffirm the numbers and you do not like it, then you can do whatever you want,” added CS Magoha.