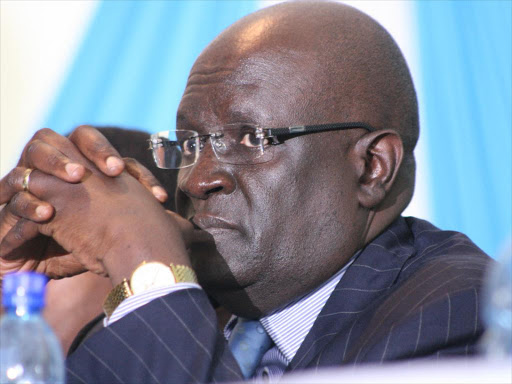 Education Cabinet Secretary Prof. George Magoha has urged the incoming government to give him more time to supervise the construction of CBC classrooms into completion.

Magoha has indicated that the Education Ministry is in its tail end of rolling out the Competency-Based Curriculum, he acknowledged that he still needs time under the next president to ensure all classrooms are completed.

“We intend to complete most of the CBC classrooms by election time, should there be a small balance, since I am not a politician, and you can judge me on that, only God knows who will be the president, I don’t know and whoever comes in will be my commander in chief,” said Prof. Magoha, “I hope that before that person is sworn in, they can allow me to finish the remaining classrooms.”

“I stand guided if I’m allowed to continue, I shall continue to ensure that the classrooms are completed, if I’m guided to go and rest, then I will obey the command because I work at someone’s command,” he added.

Students will resume school on Thursday 11th August, 2022, according to Monday’s directive by CS Magoha.

The first batch of Grade 7 learners will start joining Junior Secondary schools under the CBC program in January next year.

Some 2.5 million students will be transitioning under the curriculum which is still contentious among education stakeholders, who have been calling on the government to set aside its implementation.

They argue that the system lacks proper basic structures.

At the same time, Education cabinet secretary Prof Magoha has directed all basic education institutions to close for one week beginning tomorrow ahead of the general elections slated for Tuesday next week.

“As you are aware, Kenya is scheduled to conduct its national elections on Tuesday 9 August 2022. Therefore, following consultation, I hereby convey the Government’s decision on the immediate closure of all basic education institutions from Tuesday 2 until Wednesday 10 August to ensure that preparations and conduct of upcoming elections is carried out seamlessly,” Prof Magoha said in a statement.

Schools and parents have been advised to ensure that learners from all basic education institutions proceed on their half term effective 2nd of August, 2022 and resume on Thursday 11th, 2022.