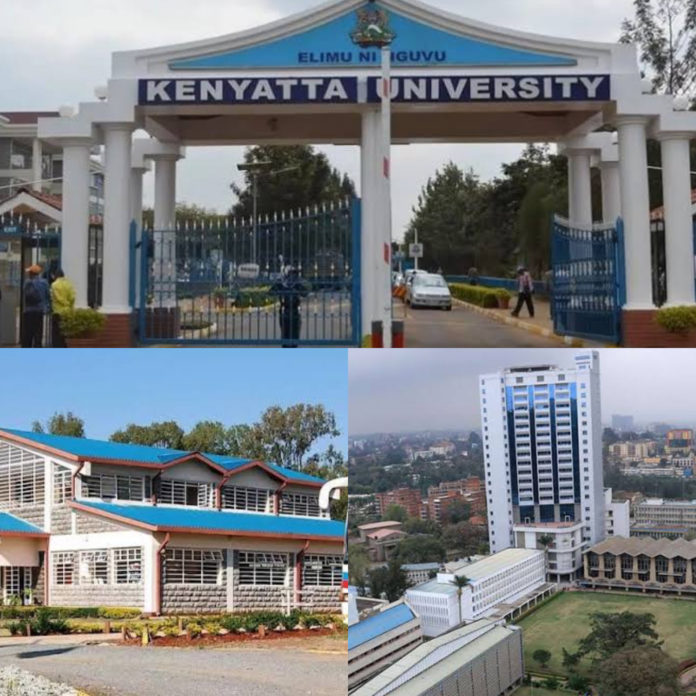 The University of Nairobi (UoN), based in Kenya’s capital, is the oldest and largest university in the country.

It was first founded as the Royal Technical College in 1956 and, after a number of transformations and name changes, in 1970 it became known as the university it is today.

For many years UoN was the only higher education institution in Kenya.

Kenyatta University (KU) is a public research university with its main campus in both Nairobi County and Kiambu County.

It acquired the status of university in 1985, being the third university after University of Nairobi (1970) and Moi University (1984). As of October 2014, it was one of 23 public universities in the country.

Jomo Kenyatta University of Agriculture and Technology (JKUAT) is a public university Kenya.

It is situated in Juja along the Thika SuperHighway. It offers courses in Technology, Engineering, Science, Architecture and Building sciences.

The university has a strong research interest in the areas of biotechnology and engineering.

Strathmore University is a catholic university based in Nairobi.

The university is accredited by the Commission for Higher Education in Kenya and by the Western Association of Schools and Colleges.

It was established in 1984 by the Moi University Act of the Parliament of Kenya, after recommendations from the McKay Commission.

MKU is one of the largest private universities in the country, with a student body in excess of 52,000, as at September 2015.

Egerton University is one of the oldest institutions of higher learning in Kenya.

It was founded as a Farm School in 1939 by Lord Maurice Egerton of Tatton, a British national who settled in Kenya in the 1920s. In 1950, the School was upgraded to an Agricultural College offering diploma programmes.

Technical University of Kenya is a public university in Nairobi, Kenya.

It was chartered in January 2013 by then-president Mwai Kibaki.

CUEA in a Nairobi based Universities founded on 3 September 1984 in as a Graduate School of Theology, under the name the Catholic Higher Institute of Eastern Africa (CHIEA).

The Institute was founded by the regional ecclesiastical authority known as Association of Member Episcopal Conferences of Eastern Africa (AMECEA).

Other top universities in Kenya include: