Wetangula dismisses ouster to replace him with Wafula Wamunyinyi 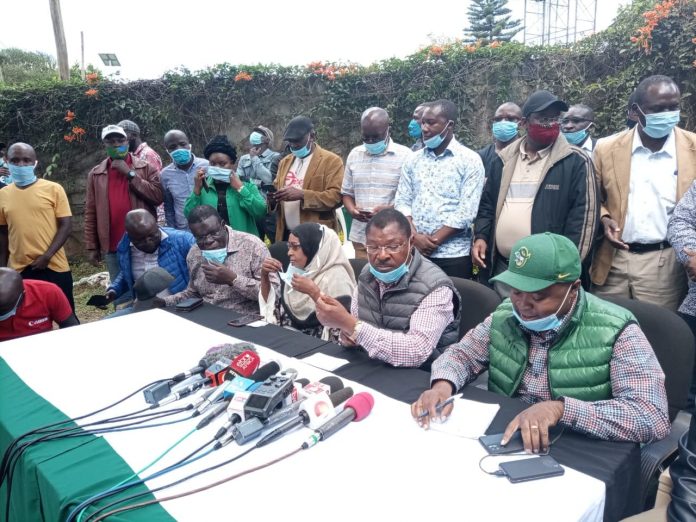 This is after Wetang’ula was ousted as the party’s Leader and replaced by the Kanduyi MP Wafula Wamunyinyi during the announcement made at Radisson Hotel in Nairobi.

Speaking at the Ford Kenya party Headquarters in Nairobi, Wetang’ula also announced that he has suspended Secretary General Dr. Eseli Simiyu and replaced him with Kiminini MP Chris Wamalwa who was recently ousted as the Deputy Chief Whip in the National Assembly and replaced by the same Simiyu.

During a press conference, Wetangula accused the party’s NEC of airlifting impostors to bundle him out of the party leadership.
“They were airlifting impostors yesterday from Kisumu and Mombasa, those people are not even members of Ford Kenya’s NEC,” he said.
The embattled senator alleges that several people were booked at the high-end Radisson Blu hotel before meeting to vote on his ouster.
Further, he claims that those who voted in favour of his ouster were coerced into making the unlawful changes.
“A grouping calling themselves NEC members of this party airlifted people who are not officials of this party; booked & detained them forcefully overnight & made decisions affecting this party. We shall discipline these truant & errant members,” he said.

In his announcement, Wetang’ula termed Wamunyinyi and Eseli as his big betrayers after what he has done to them in life.

“Wamunyinyi has been my close confidant and has walked in my shadows throughout, but unfortunately, we have to take actions to instill discipline in the the party by suspending him,’ Wetang’ula said.

The rebel team has accused Wetang’ula or running the party as his kiosk, dividing leaders and members across all the frontiers.

They also accused Wetangula of falling out with all the two Governors on Ford Kenya ticket instead of uniting the members of the Ford Kenya party.

The latest unfolding mirrors the 2007 saga where Soita Shitanda attempted to snatch the Ford Kenya party from Wetangula’s predecessor Musikari Kombo before court battles saw the formation of the New Ford Kenya party that was later sold to Jubilee Party.