More
HomeEducation NewsSecondary SchoolsTSC To Train Over 60,000 Teachers For JSS 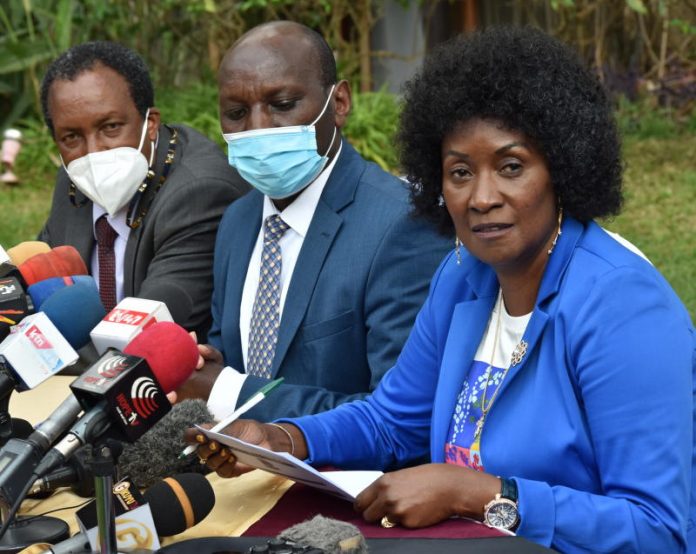 Teachers Service Commission TSC is set to train over 60,000 secondary school to prepare them for Junior Secondary School.

Classes are slated to take place in March and April 2022.

The Commission has so far trained 120,000 primary school teachers to handle grade six learners next term.

The four-day-training which was organized by both TSC and the Kenya National Examinations Council (Knec) took place in December.

In 2023 the Competency Based Curriculum (CBC) will spill over to junior secondary. Junior secondary school will comprise of Grades 7, 8 and 9.

Pioneer learners under the new 2-6-3-3-3 CBC system will transition to junior secondary school after sitting the Grade Six national examinations.

The Kenya Institute of Curriculum Development (KICD) said curriculum designs from Grade One to Ten are ready.

During the Mashujaa day celebrations in Kirinyaga, President Uhuru made the announcement that the government will set aside sh. 8 billion for constructing 10,000 junior secondary classes.

According to Education Cabinet Secretary George Magoha and Interior’s Fred Matiang’i, the classes to be constructed in the first phase will accommodate learners transiting from primary to junior secondary schools.

Dr Matiang’i said the classrooms will be ready to accommodate learners by 2023.

The government also allowed private schools to set up more classes to ease the transition of learners to junior secondary school.

Education CS George Magoha said the government does not have enough land, especially in the cities, to set up all the requisite facilities ahead of the transition.

He asked private schools to start establishing additional structures to aid in the transition.

“Nairobi, Mombasa and Kisumu do not have enough secondary schools. We encourage private schools with the capacity to set up more facilities,” he said.

The CS said the initial directive was that junior secondary schools are domiciled in secondary school compounds but lack of land appears to be preventing the transition efforts.

Over 8,000 school headteachers, resolved to push to have grades 7, 8, and 9 domiciled in primary schools, saying they had the capacity to oversee junior secondary.

The headteachers spoke during their Kepsha conference in Mombasa in December.

They said this would enable parents to participate in raising their children to tame cases of arson in secondary schools and improve education standards.

Last week, TSC dashed hope for thousands of primary school teachers who graduated with degree secondary option but with a C (plain) in KCSE.

The Commission said only teachers who scored a mean grade of C+ in the Kenya Certificate for Secondary Examination (KCSE) would be promoted to teach in secondary schools, even if they were degree holders.

This means it would not be possible for graduate P1 teachers with C (plain) in KCSE to be deployed to teach in junior secondary.

Addressing headteachers in Mombasa, TSC Deputy Director of Staffing Antonia Lentoijoni said although the qualification requirements were not popular with teachers, they would improve standards.

She said the bar was raised by the Commission to improve the quality of education, following new challenges emerging in society.

“The Teachers Service Commission has raised the entry point of teaching in the country to have the right kind of people to offer quality education to our children,” said Lentoijoni.

The decision now locks out teachers who scored C- or C and have degrees from going to teach in secondary school, despite a suggestion by Kenya National Union of Teachers (Knut) Secretary-General Collins Oyuu that teachers in primary school be allowed to teach Grade 7 and 8 in junior secondary school because several of them have masters degrees.

But the TSC insisted any teacher who wants to teach in secondary school must now have C+ and above, leaving those who got their degrees using diploma certificates in a dilemma.

Lentoijoni said teachers with the qualification that TSC had approved were the right kind of people who will ensure quality education to the children.

“These are the people with the ability to offer quality education for our children,” she said.

According to Knec learners under the Competency-Based Curriculum will not be allowed to transfer schools upon reaching Grade 6.

A document by the Kenya National Examination Council (Knec) spells that under the CBC school transfers will only be admissible to learners in between Grade 1 and 5.

Upon reaching Grade 4 and 5, learners will be required to go to the sub-county director of education should they seek a transfer.

Learners will also need a special assessment number issued by KNEC when they finish Grade 3.

This number will be used to facilitate the assessment of the learners that begins in Grade 4.

The assessment number will be consistent throughout their education and will be used by KNEC in recording the learners’ assessment progress.

This means that should a learner opts to transfer from one school to the other, they will have to retain the assessment number.

Those seeking transfers under CBC at that level—Grade 4 and 5—assessment number will be used to facilitate the transfer process.

The school where the learner was, will receive the transfer request online and click Accept/decline button.

A learner will be transferred to the new school upon acceptance by the headteacher.

“Learners not in the KNEC system at Grade 4 and 5 can be registered by both the sub-county director of education and the headteacher,” the document reads.

Under the new curriculum, transition from Grade 6 to junior high school will be based on a hybrid model involving a combination of CATs (Classroom Assessment Techniques) and KNEC tests.

Learners in the Competency-Based Curriculum will sit a final examination at the end of primary school, just like KCPE, but the test will not entirely decide their secondary school.

Learners will be required to take CATs at the end of Grades 4, 5 and 6 that will be part of the final mark the learners get at the end of primary school.

The remaining 40 per cent will be from the Kenya National Examination Council exam to be issued administered the end of Grade 6.

Headteachers shall access the Competency Based Assessment through a KNEC portal: cba.knec.ac.ke using the school’s username and password.