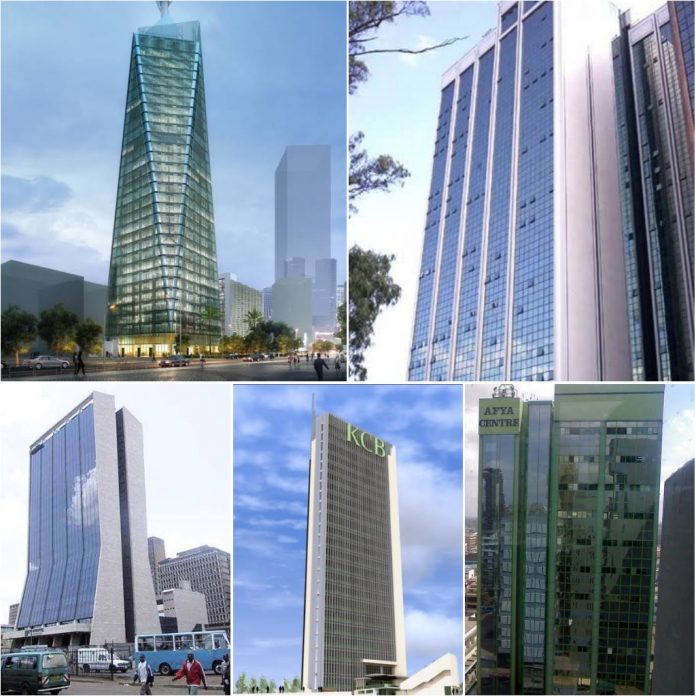 ‘The green city in the sun,’ as Nairobi is known as, is one of the fastest growing cities in Nairobi. Being the home to many organizations, business institutions as well as millions of people, the city records a bloom of more and more buildings by the day.

If you take a walk (or drive) around Nairobi, then you will notice that some buildings stand out and either overshadow or overlook the rest. The list is not arranged in any particular order of preference. Let’s have a look at them;

It is commonly referred to as ‘Archives.’ This building came into existence in 1965 after an Act of Parliament. It is situated along Moi Avenue next to Ambassadeur Hotel in Nairobi CBD with its back side being Tom Mboya street. Its exterior is cream in colour and it is fairly wide, housing thousands of artefacts collected in the 19th century. This is so far the most common building in Nairobi CBD since at any time, you will find the area around it populated with a multitude either waiting on others or casually having the time of their lives sightseeing.

It is a light green building along Temple Road in Nairobi town. It was constructed in 1965 and it has a total of 21 floors, standing 71.24 meters tall. The main thing that makes it so known is its height backed by its conspicuity.

The Kenyatta International Conference Centre is a 28-floor building that is located along Harambee Avenue opposite the Nairobi County Assembly. It came into existence around the 1960s. Its main purpose is MICE that is, Meetings, Incentives travel, Conferences and Exhibitions.

It is a white building along Moi Avenue, opposite Ambassadeur Hotel. Being strategically located in the CBD plus its having a white colour make it so conspicuous. Kenya Commercial Bank is housed in that building.

This is one of the most recent buildings in Nairobi CBD. It is a 99-meter-tall building whose construction was completed in December 2015. The building is located in Upper Hill and it boasts of 21 floors of office space.

With a height of 140 meters, Times Tower was the tallest building in East Africa between the period of 2000-2015. Currently, it stands as the 3rd tallest building in Kenya after being surpassed by Britam towers (200m) and UAP towers (163m). It has 36 floors and it is the home to Kenya Revenue Authority. It is located along Haile Selassie Avenue in Nairobi.

It is the 2nd tallest building in Nairobi with a height of 163 meters tall. It got to boast of being the tallest building in 2015 after its completion which displaced Times Tower of its then supremacy. However, it currently stands as the 2nd one after Britam towers came into existence. The building contains 33 floors mainly for official purposes. The tower is located in Upper Hill region along Hospital Road which is approximately 3.5 km west of Nairobi CBD.

This is the tallest building in Nairobi at the moment, boasting of a height of 200 meters and having 31 floors. It is located in Upper Hill.

This skyscraper is located along University Way in Nairobi. It is approximately 79 meters tall and it has 26 floors. You cannot miss to spot this beauty especially if you are around the University of Nairobi region.

It is an 83 meter building that takes the shape of bell bottom trousers. It has 25 floors. The building got affected by the 1998 US Embassy bomb blast that led to its renovation in 1999. It is located along Haile Selassie Avenue.