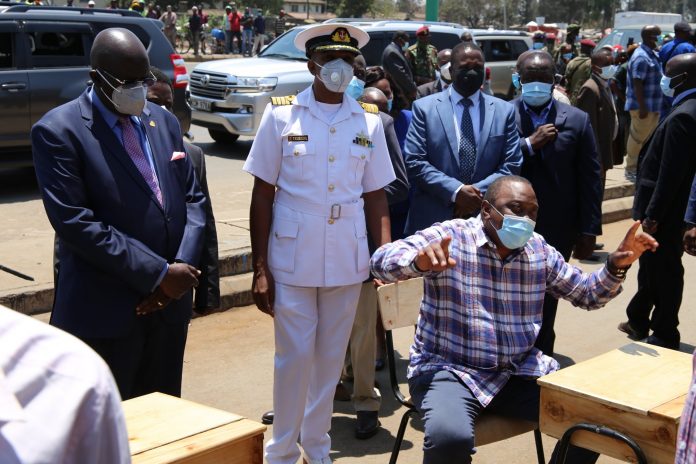 President Uhuru Kenyatta has decided to take an in-person inspection of  the production of Sh1.9 billion school furniture project ahead of resumption of learning.

The ultimate aim of the project is to produce over 650,000 that will help in effecting social distance in schools, in the light of Covid-19 pandemic.

The head of state was accompanied by Education CS George Magoha, Interior CS Fred Matiang’i and PS Karanja Kibicho. He visited a workshop in Umoja that is contracted to craft desks, lockers, and chairs.

The workshop is owned by a youth, Dean Achesa who is among thousands of local artisans contracted by the government for production.

While launching the production of furniture in Umoja, the head of state said that the project of production of desks, chairs and lockers will be given to youth so that they can exercise their skills.

“After Kazi Mtaani program, we have said instead of school desks being made by big companies, we give our youth the opportunity to exercise their skills.

“We believe in individuals earning from their sweat and hence we decided to give our skilled youth the opportunity to earn decent livelihoods,” the President said.

President Uhuru also encouraged young people to refrain from squandering every coin they get, instead they should join SACCOs and save for the future.

Once you start this work encourage all young people to form SACCO’s where they can be putting their savings. You should not utilise every coin, it is wise for you to save for the future,” the President said.

While commenting on national politics, President Uhuru noted that he won’t participate in politics of name calling. Instead, he will work hard to ensure Kenyans enjoy fruits of their hard labour.

“I don’t want to engage in empty politics of name calling. Rather, I am working hard to ensure all Kenyans work and enjoy the fruits of their labour,” he said.