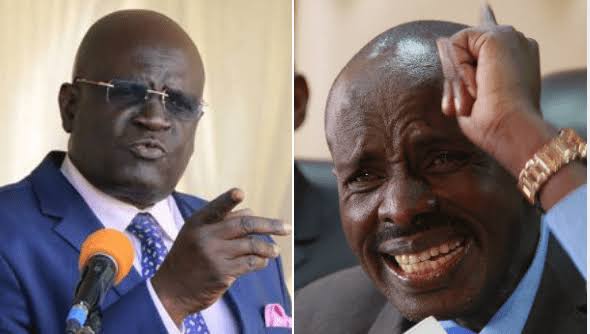 ODM nominated MP Wilson Sossion who also doubles up as the Secretary General of the Kenya National Union of Teacher(KNUT) has registered his displeasure after being left out in a 9-member committee that was formed by the ministry of education.

The committee was formed early this week to advice the ministry of education on most appropriate ways of reopening schools amid Covid-19 pandemic.

On Thursday 14 May, Mr. Sossion faulted  CS Magoha for excluding the the giant teachers’s union.

“The union despite being a principal player in the Basic Education sub-sector, Magoha has continued to maliciously exclude it from major decision-making processes that would define the future of education of this country,” said Sossion.

“Anything without our involvement and participation cannot be for us. Nothing for us without us,” added the SG.

The KNUT SG further poked holes in the committee that was formed citing the inclusion of non-professionals in the education sector.

“Magoha cannot purport to implement CBC through a taskforce which excludes participation of teachers and includes non-professionals in the education sector,” he said.

By not involving the union, Sossion added that Magoha had contravened the international convention, treaties, protocols and agreements as provided for within the International Labor Organization (ILO), United Nations Educational, Scientific and Cultural Organization (UNESCO) and the union’s constitution.

Mr. Sossion now demands immediate inclusion in the committee after his counterpart in KUPPET, Akello Misori received an invitation letter to join the committee.

The Committee’s Secretariat which is located at the Kenya Institute of Curriculum Development is expected to submit regular reports to CS Magoha on the implementation progress of COVID-19 related programmes.

The committee which has already begun working will be tasked with:

2. Reviewing and reorganizing the school calendar as part of the COVID-19 post recovery strategy.

3. Advising the Cabinet Secretary on ways of onboarding students/pupils when the schools re-open.