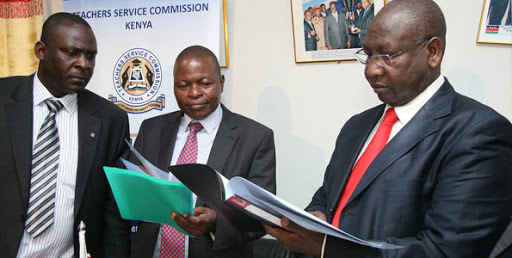 Moses Nthurima who is the KUPPET deputy secretary general also noted the ministry of education should access the situation in a period of a month and find out how candidates can be allowed back seamlessly.

He further suggested that once candidates have been admitted back, a month later form three students in secondary schools and pupils of class six and seven in primary should also join them.

“After one month, the government could admit students in form three in secondary schools and class six and seven at primary level,” said mr. Nthurima as reported by nation newspaper.

According to the deputy secretary general, school reopening plan should include mechanisms that make it easy for social distancing guidelines not to be flouted.

He suggested that individualized assignments, marking of students books and micro-mangement should be suspended and a temporary prohibition of fees payment  allowed until economy improves.

Mr. Nthurima further faulted the ministry of education for leaving out key stakeholders in education sector in schools’ reopening plan that was launched last week at KICD by Education CS professor Magoha.

“The task force must include all stakeholders including teachers’ unions, independent medical professionals and civil society sector,” state mr. Nthurima.

The committee that was tasked with hatching of schools’ reopening plan left out major players in the education sector including Kenya National Union of Teachers (KNUT), the Universities Academic Staff Union (UASU) and the Trained Eye Teachers Association(TETA) which represents ECDE teachers.

Government has so far not given a second thought to the examination dates of both KCPE and KCSE 2020, despite too much academic time lost since Covid-19 pandemic took its toll on education sector.

According to Kenya National Examination Council (KNEC), the Kenyan Certificate of Primary Education (KCPE) will be done from October 26, 2020, and expected to come to an end on October 29, 2020.

Concern as a Section of Classes at Kiamabundu Primary School Collapse