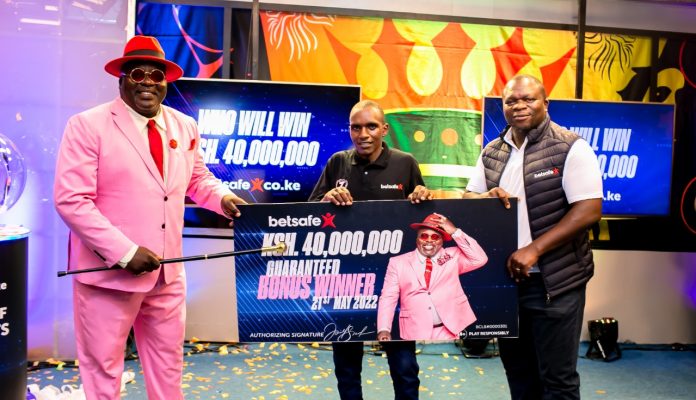 Geroge Karanja is now officially a millionaire. This was after he was announced the winner of the Betsafe Ksh. 40million Jackpot on Saturday, 21st May.

“It is interesting that I was finalist number seven and won the jackpot on my daughter’s birthday, the 21st of May which is a multiple of seven”, says Geroge.

Geroge expressed his happiness at the RFUEA Grounds. He spoke to the media, saying that he was surprised that he was the winner.

“When I was announced as the winner, I was very happy. I thank God for the opportunity to be a millionaire. Even though I’ll keep playing until I get the grand prize of Sh. 100,000,000 from Betsafe, I implore other gamers to play wisely and never bet with money they can’t afford to lose,” the farmer spoke.

“As of now, I just want to scale up my dairy business so that I can secure my future”, says Geroge.

Victor Simiyu, Betsafe CEO, spoke saying that they would provide a financial adviser to help Geroge manage his finances well.

“As a business, we are excited that George emerged the winner. This shows the commitment that we have to our players and the market. We are here to stay. We wish George all the best as he starts his life as a millionaire. We will be with him all through to ensure that he makes the right decisions and give him the right financial advice,” says Simiyu.

Geroge’s journey towards becoming a millionaire began when he guessed the outcome of 10 out of 17 games in the Betsafe Super Jackpot. This was on Monday, 16th May, and he was announced to be one of the finalists. There were ten finalists who were randomly selected by the Betting Control and Licensing Board.

“From the start, we have continuously abided by all the rules set out by the BCLB to ensure the process was fair to all players. As a company, we aim to set the standard in transparency and fairness by which all other betting companies will be judged”, Simiyu said at earlier conference.