In a statement, the group expressed excitement, stating “We are thrilled to join the Black Market Records Family alongside some of the artists we admire the most. This is like a dream come true and we still can’t believe that this is happening to us. We can’t thank our fans enough for their endless support and for making everything possible. 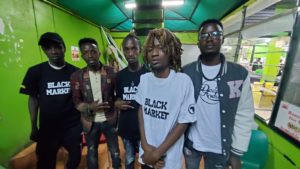 The striking young talented group has an amazing sound and offers something different with an exciting and fan-filled kind of music known as Gengetone. The group has been dropping projects after projects and shows. Their fans describe them as having the perfect mix of energy, vibe, and skill during their performances.

Cedric, the CEO of Black Market Records, also stated, “Boondocks Gang has indelibly impacted the global conversation and influenced culture everywhere…At the top of that conversation, you’ll find Boondocks Gang. They’re ushering the genre into the future with an original style befitting of their experience, passion, and diverse influences. We’re honored to welcome them to the Black Market Records family.”